This Presidential Race Has Been Remarkably Stable 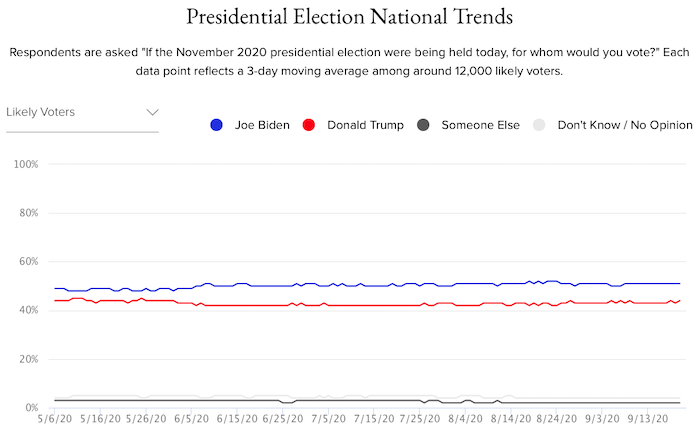 The chart above is from the Morning Consult Poll. Each point on the chart reflects a three day average of about 12,000 voters.

Notice how constant the results of the poll has been. Since early June, Biden lead over Trump has been virtually the same.

Is this election over? Have voters already made up their minds about how they will vote? I think that is probably true. Most people don't want Trump in the White House another four years, and they have decided that Biden is an acceptable replacement for Trump.

WARNING! -- This doesn't mean you don't have to vote!

A majority opposed Trump is 2016, but too many people stayed home instead of voting -- believing their vote was not needed. We cannot let that happen again.  Whether you live in a red or blue state, your vote is needed -- every vote is needed. A large voter turnout will kick Trump out of the White House, while a small turnout could help him squeak out another win.