Trump Is A Sociopath - With No Regard For Human Life 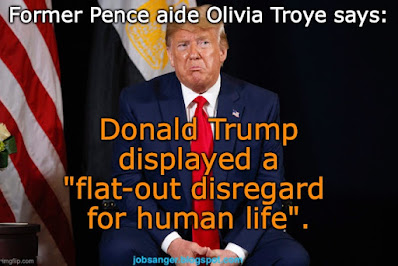 We know that Donald Trump is dishonest, corrupt, incompetent, and narcissistic. But there is something else about him that is even worse -- he simply doesn't care about the lives of American citizens (or anyone else).

There is only one person he cares about -- himself, and he will happily throw anyone under the bus if he thinks it will benefit him.

Here's part of how Jonathan Chait puts it in New York Magazine:

A procession of former Trump administration officials, speaking both on and off the record, have depicted the president as fundamentally unfit for office. Yesterday, the latest addition to their ranks, former Mike Pence aide Olivia Troye, put an especially fine point on the indictment. President Trump displayed “flat-out disregard for human life.”

Even by the hyperinflated standards of the Trump era, disregard for human life is an extraordinarily serious charge. The most basic trait any president must have, below even simple competence and honesty, is a desire to safeguard the well-being of the public. Almost anybody would agree that a president who simply does not care if Americans die is morally disqualified from office. Nut there is plenty of available evidence to support it.

We should be precise about what exactly it means to say Trump has disregard for human life. Every president takes actions that put lives at risk (most obviously by using military force.) Many policies unavoidably involve trade-offs with that risk. Management of a pandemic is also going to involve decisions that, in one form or another, will entail some kind of trade-off.

To say Trump has disregard for human life is not to say he is willing to make cold decisions for the sake of a greater good, though. Troye is saying the president literally does not care about American deaths except insofar as it affects his own political standing. "The truth is he doesn't actually care about anyone else other than himself," she says. . . .

There’s a term for a person who views other humans purely as instruments for his own advancement, and is unable to conceive of the idea of caring about them independent of his own self-interest: “sociopath.” The United States has had some terrible presidents before, but probably never a sociopathic one. When his own aides warn the public that he does not care if the people he is tasked with helping live or die, we should take their warnings with the utmost seriousness.