Trump Is A Tax Cheat Or A Terrible Businessman (Or Both) 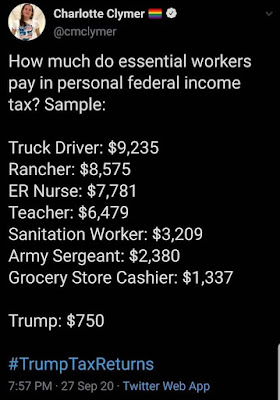 We now know why Trump so adamantly refused to release his tax returns (like candidates of both parties have done in the recent past).
The New York Times got hold of multiple years of Trump's tax forms. It turns out that he didn't pay any income taxes in most years (and made no charitable contributions). In the couple of years that he did pay taxes, he only paid $750.
It turns out that nearly every worker in this country paid more in income taxes than Donald Trump. Even undocumented immigrants paid more than Trump!
The excuse he used was that he had lost money. That's hard to believe that he could lose money every year and still remain solvent. He's either the worst businessman in the country or the biggest tax cheater. Probably both.
The New York Times has a great article on Trump's tax returns and financial situation. I encourage you to read the entire article, but here's a small sample from it:
Donald J. Trump paid $750 in federal income taxes the year he won the presidency. In his first year in the White House, he paid another $750.
He had paid no income taxes at all in 10 of the previous 15 years — largely because he reported losing much more money than he made.
As the president wages a re-election campaign that polls say he is in danger of losing, his finances are under stress, beset by losses and hundreds of millions of dollars in debt coming due that he has personally guaranteed. Also hanging over him is a decade-long audit battle with the Internal Revenue Service over the legitimacy of a $72.9 million tax refund that he claimed, and received, after declaring huge losses. An adverse ruling could cost him more than $100 million.
The tax returns that Mr. Trump has long fought to keep private tell a story fundamentally different from the one he has sold to the American public. His reports to the I.R.S. portray a businessman who takes in hundreds of millions of dollars a year yet racks up chronic losses that he aggressively employs to avoid paying taxes. Now, with his financial challenges mounting, the records show that he depends more and more on making money from businesses that put him in potential and often direct conflict of interest with his job as president. . . .
Ultimately, Mr. Trump has been more successful playing a business mogul than being one in real life.
“The Apprentice,” along with the licensing and endorsement deals that flowed from his expanding celebrity, brought Mr. Trump a total of $427.4 million, The Times’s analysis of the records found. He invested much of that in a collection of businesses, mostly golf courses, that in the years since have steadily devoured cash — much as  the money he secretly received from his father financed a spree of quixotic overspending that led to his collapse in the early 1990s.
Indeed, his financial condition when he announced his run for president in 2015 lends some credence to the notion that his long-shot campaign was at least in part a gambit to reanimate the marketability of his name. . . .
The picture that perhaps emerges most starkly from the mountain of figures and tax schedules prepared by Mr. Trump’s accountants is of a businessman-president in a tightening financial vise.
Most of Mr. Trump’s core enterprises — from his constellation of golf courses to his conservative-magnet hotel in Washington — report losing millions, if not tens of millions, of dollars year after year.
His revenue from “The Apprentice” and from licensing deals is drying up, and several years ago he sold nearly all the stocks that now might have helped him plug holes in his struggling properties.
The tax audit looms.
And within the next four years, more than $300 million in loans — obligations for which he is personally responsible — will come due.
Against that backdrop, the records go much further toward revealing the actual and potential conflicts of interest created by Mr. Trump’s refusal to divest himself of his business interests while in the White House. His properties have become bazaars for collecting money directly from lobbyists, foreign officials and others seeking face time, access or favor; the records for the first time put precise dollar figures on those transactions.
Posted by Ted McLaughlin at 12:02 AM