Trump Threatens Election Process But Is Powerless To Do it 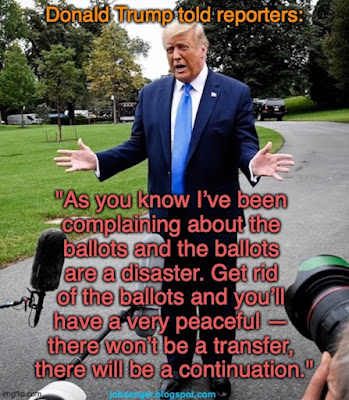 Donald Trump is trailing in the presidential election, and has been for months. He has tried everything he knows to change that (bullying, lying, name-calling, etc.), but nothing has worked. Now he is trying to cheat.

He wants to outlaw mail-in ballots, and if he can't do that, will claim the election was fraudulent. He has even suggested that he would refuse to peacefully transfer power if he loses the vote, and has suggested that GOP state legislatures ignore the wishes of voters in their state and pick a slate of Trump electoral college voters.

He has one problem. It's all bluster, because he doesn't have to power to alter voting (which is run by the separate states) or change electoral college slates (which are set by state law).

Here's part of what Teri Kanefield has to say about Trump's efforts in The Washington Post:

If you are Donald Trump, and your image is based on the claim that you are a winner, what do you do when every recent national poll has you losing and you’re heading for a likely electoral defeat? How do you energize your base and get them excited about voting if the media narrative is that you are losing? How do you stop people from talking about your failed pandemic policies, tapes showing that you lied to the American people, an economy in trouble and polls showing the Republicans are likely to lose their Senate majority?

You create a fiction: You tell the world that you are not losing, and that you have no intention of being defeated.

And so, on Wednesday, when a journalist asked President Trump if he would commit to making sure there’s a peaceful transfer of power after the election, Trump responded by saying, “We're going to have to see what happens. As you know I’ve been complaining about the ballots and the ballots are a disaster.” (The ballots are not, in fact, a “disaster.”) He went on to say: “Get rid of the ballots and you’ll have a very peaceful — there won’t be a transfer, there will be a continuation.” Not surprisingly, the spectacle of the U.S. president announcing to the world that he plans to get rid of ballots so that there won’t be a transfer of power triggered massive outrage.

But Trump doesn’t have the power to get rid of the ballots. Trump doesn’t control state elections. While he can certainly try to bring legal challenges, those challenges would need a legal basis. He probably won’t succeed in trying to prevent the peaceful transfer of power to Joe Biden if he loses. Trump is still doing what he always does: attempting to make his imaginary world — where he’s all-powerful and could only lose if his opponents cheat — into reality, in hopes of rallying his voters and panicking the rest of us.

The Trump campaign is already musing about finding ways for the president to steal the election. An anonymous legal adviser to Trump’s camp told the Atlantic’s Barton Gellman that Republican-controlled state legislatures are contemplating sending Trump-supporting slates of electors in for the electoral college vote count, even if Biden wins their states.

That isn’t as easy as it might sound. While the Constitution gives states the authority to allocate their electoral votes as they wish, every state has laws giving that power to the voters. For that matter, each state has laws for how their elections will be monitored and certified, and how the electoral votes will be cast. The legislature cannot suddenly reallocate that power without amending their laws. If they want to amend the laws, they have to follow their states’ procedures — which includes the possibility that governors could veto such legislation, which would certainly happen in a state such as Pennsylvania, which has a Republican legislature and a Democratic governor. Republicans there don’t have enough statehouse votes to override a veto. Similar problems would arise in other states. . . .

But Trump’s campaign wants Americans to think that Trump can, with the snap of his fingers, order state legislatures to defy their own laws — and that they’ll do it. . . .

Thus Trump creates a fantasy world in which he is an unstoppable winner, and his critics inadvertently lend credence to the fantasy by acting as if it is true.

But he does not control elections in 50 states and the District of Columbia. He cannot get rid of ballots. He does not decide who won the election. He does not choose when he leaves the White House. And on top of that, he loses constantly. Did Mexico ever build that wall? Did Democrats not win the 2018 elections? If Trump could fix elections, Nancy Pelosi would not be speaker of the House. In Wisconsin’s special election just this past April, Trump threw his support behind Dan Kelly while the GOP did all it could to suppress the Democratic vote. Kelly still lost.

If we play into Trump’s hands and act as if he has the power to throw out votes and declare himself the winner of the election, we help give credence to the lie that he is all-powerful, and thus help create a reality based on Trump’s wishful thinking. The way to keep his fantasy from coming true is to avoid panicking and contributing to the hysteria — and to vote him out.