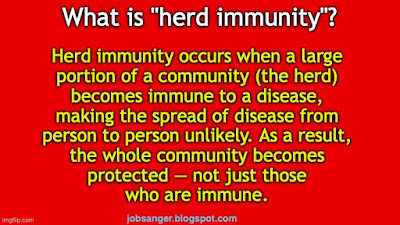 Donald Trump has badly mishandled the Coronavirus pandemic. That is beyond debate.

He delayed doing anything for a couple of months after learning about how serious the virus was. Then he placed a ban on people entering the country from China. But the ban was only a partial one, and was done after nearly 400,000 had already entered.

He could have still mitigated the damage caused by the virus, but he didn't. He has refused to act in an appropriate manner. After calling the virus a hoax, he denigrated the wearing of masks and social distancing. He then demanded states reopen their economies, even though the virus was not yet controlled. And he has demanded that schools reopen.

Now he has come up with his craziest (and most dangerous) idea yet. He has said recently that the virus will die out once herd immunity is reached. It looks like he has given up, and wants to give the virus full range.

He is right -- the virus will die out after herd immunity occurs. But he is ignoring (or refuses to admit) the price this country will pay to reach herd immunity.

What is herd immunity? That's when enough people in the country have gotten the virus and recovered (and now have immunity) so the virus has trouble finding new victims, and dies out.

Let's look at the numbers that it would require to achieve herd immunity in the United States.

But let's be generous, and assume that better treatments are found and the death percentage is lowered to 1%. That would still mean about 2,240,000 people would die.

So Trump's idea of achieving herd immunity would mean between 2,240,000 and 6,720,000 would have to die to achieve that. Is that acceptable to you? I think it's an insane idea to sacrifice more than 2 million people when we know that we could save millions of lives and control the virus by wearing masks and social distancing.

Trump shows us once again that he simply doesn't care about the lives (or health) of the American people.