Voting For The GOP, Is Voting Against Health Insurance 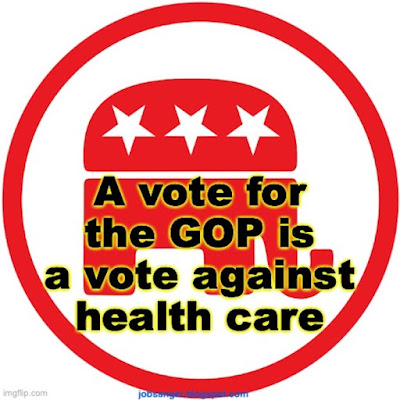 This is a serious problem. No other developed country has citizens that are not covered with insurance for medical care. All those nations provide decent health care for all their citizens -- either through a national health system (like Great Britain) or guaranteed health insurance (like France or Canada).

Those nations recognize health care as a right for all of their citizens. The United States does not. The Republicans in our government see health care as a product that should only be sold to those who can pay for it. And they have had enough power in our federal government to prevent the government from assuring all citizens have insurance that will provide them with decent and affordable medical care.

The Republicans say they want medicare insurance for all citizens. And in his 2016 campaign, Donald Trump said he would make sure all Americans were covered by health insurance. They were all lying!

Trump has been in office for over three years, and he has not come up with any plan to cover all Americans with health insurance. Around the first of August, Trump said he would release his idea for a great health insurance plan in two weeks. It is now two months later, and there is no plan. And the congressional Republicans are even worse. They have been promising a plan since Obamacare was passed, and still have no plan. They even tried to outlaw Obamacare with no replacement plan.

And they are still trying to outlaw Obamacare. Currently, they have a case that will soon be heard by the Supreme Court. If they win that case, Obamacare will be outlawed, causing many millions of Americans to lose their health insurance, and many millions more to lose the coverage for pre-existing conditions (will will make their insurance much more expensive -- perhaps unaffordable). With the new justice appointed by Trump (and sure to be approved by the Senate), the odds are much greater that they will win that case.

That means there is only one way to assure that all Americans, regardless of income or ability to pay, will have health insurance (and are able to access life-saving preventative care). We must flip the Senate over to Democratic control and put a Democrat (Biden) in the White House. Democrats have promised to pass a public option for health insurance -- one that will cover those who can't afford private insurance, and will stop private companies for charging more for pre-existing conditions.

The Republicans have no plan. And if they retain enough power after the next election, they will block the Democratic plan. They will leave tens of millions of Americans without health insurance -- causing many thousands to die each year because they could not afford the preventative care that would have saved their lives.

If you vote for the Republicans, you are voting against health care. That is just a fact.