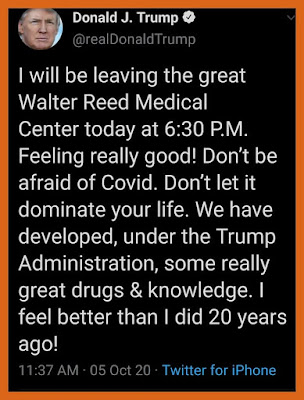 The image at right is a tweet from Donald Trump while in Walter Reed Medical Center. Do you believe what he says? I don't!

There is only one line in the tweet that is believable -- the first line that says he is leaving the hospital. He did use the power of his office to bully the doctors into letting him return to the White House.

The rest is bullshit!

That's not believable, even though he has been shot full of steroids. He has COVID-19, and he has not yet recovered from it.

*Don't be afraid of Covid. Don't let it dominate your life.

That's utterly ridiculous! Over 200,000 people have died from the virus, and he's still trying to downplay it. All the medical and public health officials say you should take it seriously.

*We have developed, under the Trump administration, some really great drugs & knowledge.

An outright lie. No cures or really effective treatments have been developed to combat the virus -- and there is still no vaccine to prevent it.

Ridiculous! He feels better than he did in his mid-fifties while sick with a virus in his mid-seventies? I wouldn't believe that even if he didn't have COVID-19.