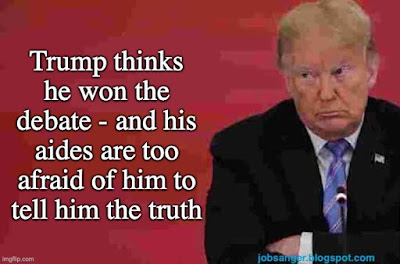 Donald Trump lives in his own delusional world. He has been bragging about winning last Tuesday's debate to everyone in the White House, and on the campaign trail.

Those who work for him know the truth -- that he just embarrassed himself during the debate. But they are afraid to tell him the truth, because he would probably fire them for doing that.

This delusional fool does not allow anyone to disagree with him.

Here is how Gabriel Sherman puts it in  Vanity Fair:

Donald Trump’s campaign is still assessing the political damage from Tuesday night’s chaotic first presidential debate. The president’s refusal to condemn white supremacists, of course, is the immediate crisis. “He blew that for sure,” a campaign adviser told me. “It’s nuts,” a former West Wing official said wearily, sounding like a storm survivor with PTSD. “Total lunacy,” said another former White House staffer, who remains close to the campaign. “Trump didn’t win over any voters, and he pissed off a lot of people,” added a prominent Republican.

Trump advisers agree on what he needs to do differently at the next debate. “He has to just relax and let Joe Biden speak,” said the ex-official, who remains close to the White House. But Republicans are resigned to the fact that Trump is unlikely––or unwilling––to course-correct. “Trump thinks he won. He didn’t,” said another Republican with ties to the campaign. “But does anyone have the balls to tell him that? No. They’d be fired.”

Trump doesn’t accept the consensus that the debate was a disaster because, sources said, he was unabashedly himself. “The thing about the debate is people got to see why no one that has any integrity can work for Trump. This is what Trump is like in the Oval Office every day. It’s why [John] Kelly left. It’s why [Jim] Mattis quit,” said the prominent Republican. “Trump doesn’t let anyone else speak. He really doesn’t care what you have to say. He demeans people. He talks over them. And everyone around him thinks it’s getting worse.”