Trump's Aides/Doctors Made Everything Very Clear (NOT!) 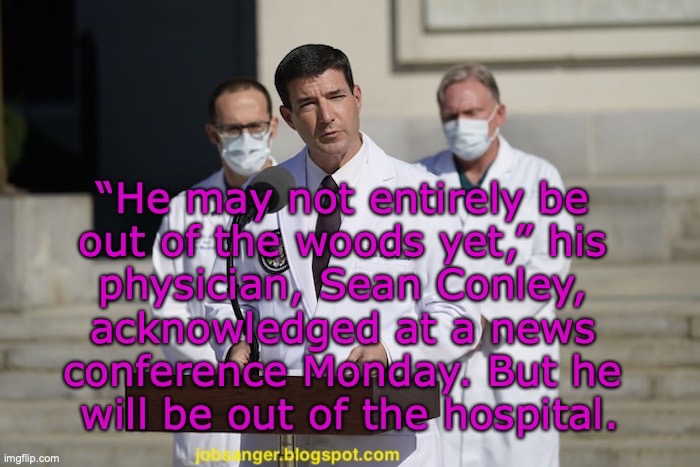 We have heard from the White House and from Trump's doctors. Did they make everything perfectly clear for you? Do you now have a clear picture of Trump's health problems? I doubt it. As with everything else about Trump, there has been more obfuscation than clarity.

The following is a good bit of satire from Alexandra Petri in The Washington Post. With her tongue planted firmly in cheek, she says everything is cleared up:

The good news in this moment of crisis is that the Trump administration has built up enough credibility that we absolutely understand what is going on right now! We have nothing to fear. The Trump team is now, and always has been, open and forthright with the American people. As President Trump said, “Going well, I think!”

In fact, it is going so well the president is leaving the hospital tonight! It is the clear, logical next step after what came before, and we, the American people, have no further questions, certainly not, “Really?” and, “Should he be doing that?” and, “That can’t possibly make sense, can it?”

“He may not entirely be out of the woods yet,” his physician, Sean Conley, acknowledged at a news conference Monday. But he will be out of the hospital — as everyone knows, after “the woods,” the hospital is the most dangerous place for patients to be during a critical time in their treatment. By the time you are reading this, he might already be back in the White House, which should not worry anyone, because the communication has been so straightforward throughout that there can be no possible cause for concern.

For instance, Conley was asked very clearly on Saturday whether the president had received any supplemental oxygen. “He has not needed any this morning, today at all,” Conley responded. Had he ever been on it? “Right now he is not.” Ever? “Yesterday and today, he was not on oxygen.” Well, I’m reassured! (“Have you ever committed any treason?” “Not this morning or literally right now!”)

This turned out to mean, Conley revealed Sunday, that he did not want to mention that the president had needed some supplemental oxygen, because that might give aid and comfort to the disease. (“I didn’t want to give any information that might steer the course of illness in another direction.”) I would never have guessed that was how diseases worked, but I am not a medical doctor.

He also reassured those who asked whether there were signs of scarring in the president’s lung tissue that they had looked into that and found “expected findings.” What are expected findings?!? Who was expecting them? What was the person who expected these findings expecting to find?

On Monday, he added that if anything had been found in Trump’s lungs, HIPAA required that he not tell us, “for his safety and his own health and reasons.” Nothing is a more compelling response to such an inquiry than, “I cannot tell you, because of reasons!” Oh, reasons! I am now at ease. I have no further questions.

In equally not-confusing terms, White House Chief of Staff Mark Meadows tried to state off the record this past weekend that things could possibly be going not so well, but he then corrected himself on the record to say that things were going great. Then the president had the idea to surprise his supporters waiting outside by driving past in an SUV and waving. Usually the willingness to get into an SUV in a cloth mask and drive around would suggest that you were no longer at a stage of the disease where getting into an enclosed SUV in a cloth mask would be putting Secret Service personnel at risk, but — never assume!

The good news is that all of this is going so well and so openly that it has freed us from the oppressive notion that any information is knowable whatsoever! That’s a great place to be when you want information about your president’s medical well-being — and as a country, in general. We all know exactly what’s going on to the degree that “knowing” permits! A third of my Internet feed right now is people who think the president has an 18-stage plan to replace himself with a luminous cloud, and those are not even the people who usually believe in dangerous conspiracies.

Thankfully, if nothing is knowable, then you are not beholden to anyone and can act as you choose. Relatedly, the president added a piece of advice in his announcement of his hospital discharge: “Don’t be afraid of Covid. Don’t let it dominate your life.”

If only the 209,000 Americans people who have died of this disease without immediate access to the drugs and facilities the president benefited from had been able to be less afraid. I am sure that would have solved it. As sure as I am of anything, now.