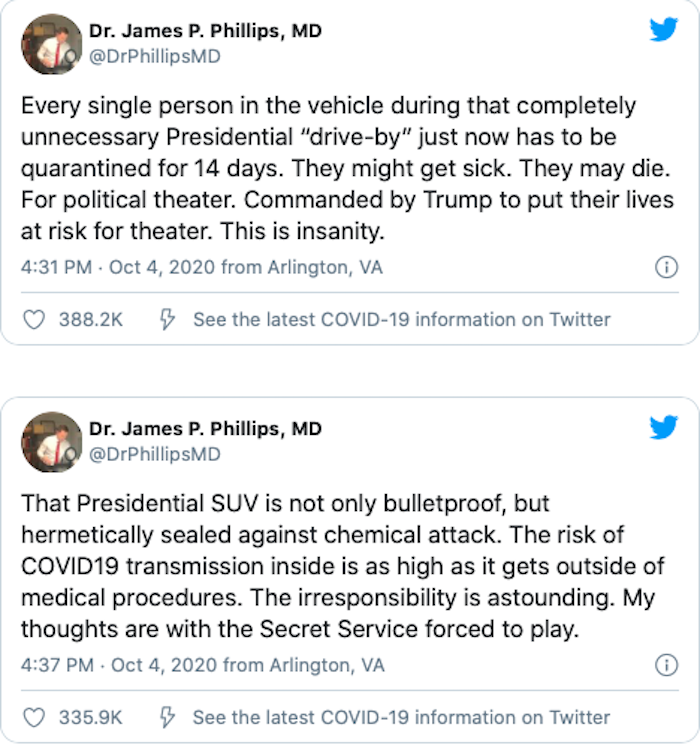 Donald Trump thinks being hospitalized for COVID-19 makes him look weak. He could not talk doctors into releasing him on Sunday, but he did force the Secret Service to accompany him on a short parade around the hospital in the presidential limo.

It was just one more instance where he showed that he cares only about himself. As one attending physician at Walter Reed said, Trump put the health of those Secret Service agents at risk (see tweets above).

Those agents are willing to put their lives on the line to protect a president, and they do a great job. But a president should not put their health (lives) in danger unnecessarily -- just for a political stunt.

CNN is reporting that some of the Secret Service agents are starting to get upset at Trump putting them in danger:

His seconds-long parade only underscored the relaxed attitude toward transmission that appear to have landed Trump in the hospital to begin with. The contained space inside the presidential limousine hardly allowed for social distancing from the driver and agent. While Trump wore a mask, his status as a Covid-positive hospital patient precluded him from falling within anyone's recommendations for a public appearance. . . .

Afterward, members of the Secret Service voiced escalating concern at what many of the agency's personnel have determined is total disregard for their well-being amid a deadly and highly contagious pandemic. Agents have tested positive for the virus while traveling for the President's political rallies, which he insisted on maintaining even against federal health guidelines. As employees self-quarantine or isolate in place, others have been forced to work longer hours to fill the void.

It's a situation that has prompted growing and more vocal concern.

"That should never have happened," one current Secret Service agent who works on the presidential and first family detail said after Trump's drive-by, adding that those agents who went along for the ride would now be required to quarantine.

"I mean, I wouldn't want to be around them," the agent said, expressing a view that multiple people at the Secret Service also voiced in the wake of Sunday's appearance. "The frustration with how we're treated when it comes to decisions on this illness goes back before this though. We're not disposable."

Another veteran Secret Service agent also expressed deep dismay at the Walter Reed ride, though was sympathetic for those around the President given the difficulty in pushing back on the commander-in-chief.

A third agent told CNN: "It was simply reckless."