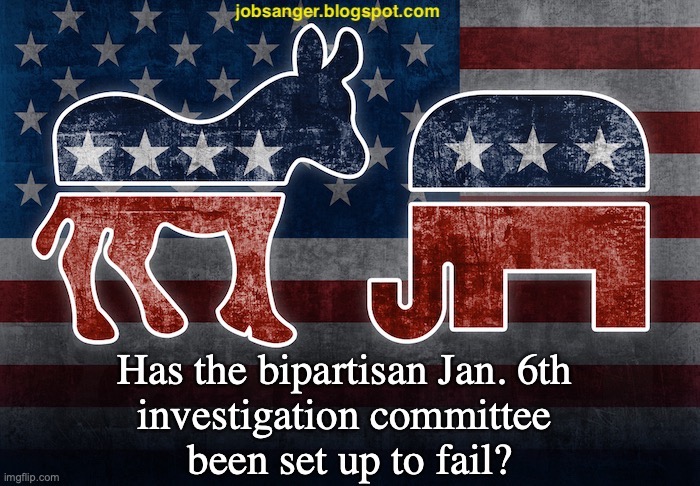 Congress has been trying to set up a committee to investigate the causes of the January 6th attack on the Capitol for several months now. Democrats hope that congressional investigation would reveal what caused the insurrection so Congress could pass laws to prevent it happening again. But Republicans have been blocking its creation. They have wanted the investigation to investigate all violence in the country, including that caused by "Antifa". Their hope is that would water down the report by the committee and partially hide the guilt of Trump supporters (and some Republicans in Congress).

The word is that the two parties have agreed on setting up the committee -- and the investigation would only concern the January 6th insurrection. That might look like a victory for the Democrats. It's not. The Republicans just found a different way to control that investigation.

The committee will have 10 members -- 5 Democrats chosen by Speaker Pelosi and Majority Leader Schumer, and 5 members chosen by Minority Leaders McCarthy and McConnell. So what is the "poison pill" in the agreement that Republicans have included?

It has to do with the committee's subpoena power. To get to the truth and make all participants in the insurrection testify before the committee, some people will have to be issued a subpoena. And to issue any subpoena, at least 6 members of the committee must agree.

The problem is that McCarthy and McConnell have revealed themselves to be Trump sycophants. That means they will likely choose rabid Trump supporters (which most congressional Republicans are) to be on the committee. And if the 5 GOP committee members stick together, then the issuance of a subpoena cannot proceed. This gives the GOP the power to block witnesses they feel would make their party (or Trump) look bad.

It will probably result in a tepid committee report that barely scrapes the surface of what really happened. GOP control over the subpoena process is the fatal flaw that dooms the investigation to failure.