Can The GOP Be Reformed Or Is A New Party Necessary? 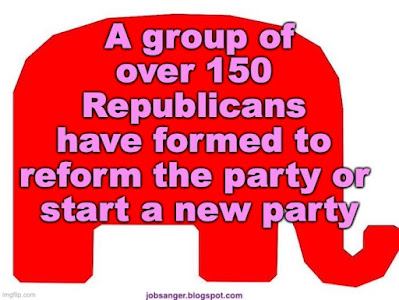 Rep. Liz Cheney, in her act of political courage, has shown us that not all Republicans are Trump toadies. And she's not alone.

A group of over 150 Republicans, many of them past officials of the party and the government, have gotten together to oppose Trump ownership of the current Republican Party.

Their aim is to reform the party, or start a new party -- free from the sick influence of Trump. And in a change from the current party (which has no principles except fealty to Trump), they have issued a manifesto with guiding principles.

Here, from Deseret.com, is a copy of that manifesto:

These United States, born of noble convictions and aspiring to high purpose, have been an exemplar of self-government to humankind. Thus, when in our democratic republic, forces of conspiracy, division, and despotism arise, it is the patriotic duty of citizens to act collectively in defense of liberty and justice. We, therefore, declare our intent to catalyze an American renewal, and to either reimagine a party dedicated to our founding ideals or else hasten the creation of such an alternative. We call for a rebirth of the American cause and do so in partnership and loyal competition with others committed to the preservation of our Union. With abiding belief in the value and potential of every soul and with goodwill for all, we hereby dedicate ourselves to these principles and make common cause in the flourishing of this great nation and its diverse states, communities, and citizens.

Democracy. We seek the preservation and betterment of our democratic republic and the endurance of our self-government, free from interference and defended against all enemies, foreign and domestic. We support reforms that make our system more accessible, transparent, and competitive, oppose the disenfranchisement of voters, and reject populism and illiberalism, whether of the right or the left.

Founding Ideals. We reaffirm the self-evident truth that all persons are created equal and free, having the same inalienable rights to life, liberty, and the pursuit of happiness, and that it is the prerogative of all to make personal decisions in accordance with their free will. We, therefore, condemn all forms of bigotry such as racism, religious intolerance, sexism, and persecution based on sexual orientation.

Constitutional Order. We uphold the Constitution as the inviolable and collective contract protecting liberty and justice for all, and honor the essential separation and balance it establishes among coequal branches of the federal government and the states.

Truth. We recognize truth and reason as essential to a free and just society, and expect our leaders, citizens, and press to seek and promote them. We oppose the employment of fear-mongering, conspiracism, and falsehoods and instead support evidence-based policymaking and honest discourse.

Rule of Law. We maintain that the impartial rule of law is essential to a free and just society to protect the rights and property of all people. No one is above the law, and our criminal justice system must treat everyone equally without discrimination based on race, status or other unrelated factors.

Ethical Government. We demand that public officials and aspiring leaders — regardless of party — act with integrity and honor, the absence of which is a harbinger for abuses of power that threaten the republic.

Pluralism. We are committed to a pluralistic society defined by its ideals and welcoming to all peoples rightfully seeking safety, opportunity, and a better life by becoming contributing members of our diverse nation. We reject the notion that America should be characterized by the races, birthplaces, religious affiliations, or partisan identities of its citizens.

Civic Responsibility. We believe that all Americans share civic responsibility, which is essential for our self-government and national success. Thriving communities are built by faithfully engaged citizens working to overcome differences with mutual respect and the bonds of civil affection. The solutions to many of America’s greatest challenges can only be found in our diverse communities.

Opportunity. We recognize open, market-based economies as consistent with our natural liberty and the optimal means of ensuring economic mobility and the allocation of scarce resources. We support sensible and limited regulation, including to ensure equal opportunity, and affirm government’s vital role in assisting vulnerable citizens, while encouraging self-reliance and ingenuity without the impediments of cronyism and corruption.

Free Speech. We reaffirm the Constitution’s guarantee of free speech and freedom of the press as essential to accountable government and the American way of life. We sustain the rights of individuals and private entities to exercise this freedom, even to express unpopular views, and condemn efforts to erode press freedom and public support for its vital role.

Conservation. We consider vital our shared stewardship of America’s resources — natural, environmental, and financial. We accept responsibility to conserve for ourselves and future generations these public assets, and to protect them from both natural and man-made harms.

Common Defense & Welfare. We uphold that government is instituted by the people to secure those essential, collective goods that individuals cannot attain for themselves, particularly providing for the common defense and promoting the general welfare. We, therefore, support policies that further public safety, health, and defense as required for enduring national sovereignty and prosperity.

Leadership. Having thrived in the abundance of a choice land, we believe that these United States must work in conjunction with friends and allies to advance worthy interests abroad and to promote freedom by example and with the judicious application of power.