Is Israel Really A "Jewish And Democratic" Country? 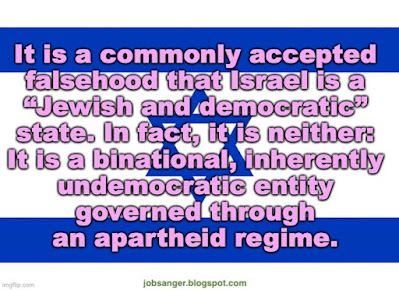 The United States has supported Israel since it became a country -- both diplomatically and financially. And most Americans agree with that support being provided.

But things have changed in that country in recent years, and I doubt that most Americans understand that. It may be time to reassess some of that support.

Consider the following thought-provoking article in The Washington Post by Hagai El-Ad (the executive director of B'Tselem --  a Jerusalem-based non-profit organization whose stated goals are to document human rights violations in the Israeli-occupied Palestinian territories, combat any denial of the existence of such violations, and help to create a human rights culture in Israel.)

Most Jewish Israelis spend their time pretending that Gaza and its 2 million Palestinians have fallen off the face of the Earth. The besieged civilian population, the polluted water, the denial of exit permitseven for essential medical care — the endless ways in which Palestinians in the Gaza Strip are humiliated by Israel day in and day out — all are largely invisible to the Jewish half of the population living between the Jordan River and the Mediterranean Sea. Invisible, until once every few years the sirens and the rockets serve as a terrible awakening.

Similarly, Israel would prefer if Palestinian families slated for forced eviction in Sheikh Jarrah — a neighborhood in occupied East Jerusalem, in the one part of the West Bank that Israel bothered to formally annex — also remained invisible. That desire is reflected in official language: Israel’s Ministry of Foreign Affairs referred to this process of gradual, state-sanctioned cleansing of the neighborhood of Palestinians, to be replaced by Jewish families, as “a real estate dispute between private parties.” That “dispute” is based on racist legislation (1950 and 1970 laws passed under “left wing” Labor governments) that allows Jews, but not Palestinians, to make ownership claims for property predating 1948. Palestinian activists this month succeeded in making sure that these abuses cannot be ignored.

These are but a few fragments of reality in Israel and the Palestinian territories. Apartheid is the organizing principle that connects all these forms of colonization and transfer, disenfranchisement and oppression, domination and supremacy. Palestinians can be second-class citizens, “permanent residents,” occupied subjects or refugees. The details vary, but the pattern is the same: All Palestinians living under Israeli rule are treated as inferior in rights and status to Jews who live in the same area. . . .

For decades, Israel managed to fence itself off from its supposedly separate and temporary occupation project. Many Palestinians have long seen right through it and called this regime of ethnic domination by its proper name. This diagnosis of apartheid is accurate not only because the occupation is inseparable from Israel (who, exactly, is running the military regime in the occupied territories?) but because policies of domination and supremacy of one group (Jews) over the other (Palestinians) are at the core of shaping reality between the river and the sea.

In this context, eruptions of violence — especially those, like this month’s, sufficiently horrific to break into the global news cycle — are not a bug but a feature of this system. State violence is a permanent tool for dispossession and control, demographic re-engineering and “deterrence.” The specific amount of violence applied is always changing, the fear it dictates never absent.

And so, repeatedly, when one or more of these fragments rises, there is surprise, people are aghast at the violence, and efforts are undertaken to restore what is misleadingly called “the status quo.” But that never means the violence has truly ended. It means only that Israel’s violence against Palestinians has once again been made invisible — that once again, tension has been made absent (for some), with injustice omnipresent (for the rest).

It is a commonly accepted falsehood that Israel is a “Jewish and democratic” state. In fact, it is neither: It is a binational, inherently undemocratic entity governed through an apartheid regime. The fragmentation of Palestinians may serve to obfuscate the truth, but how can a reality of demographic parity — some 7 million Jews, some 7 million Palestinians — be considered only “Jewish”? And when most of those Palestinians are kept disenfranchised, how can it be considered “democratic”?

U.S. foreign policy has for decades been enabling, underwriting and shielding this regime from meaningful consequences. Not only through direct aid to Israel, but also through repeated U.S. vetoes at the United Nations Security Council and the propagation of the seemingly endless “peace process” illusion — instead of prioritizing the protection and realization of the human rights that are violated every single day. Israeli impunity comes with a large “Made in the USA” label, for Washington is where it is manufactured.