Is This The Court Case That Overturns Roe v. Wade? 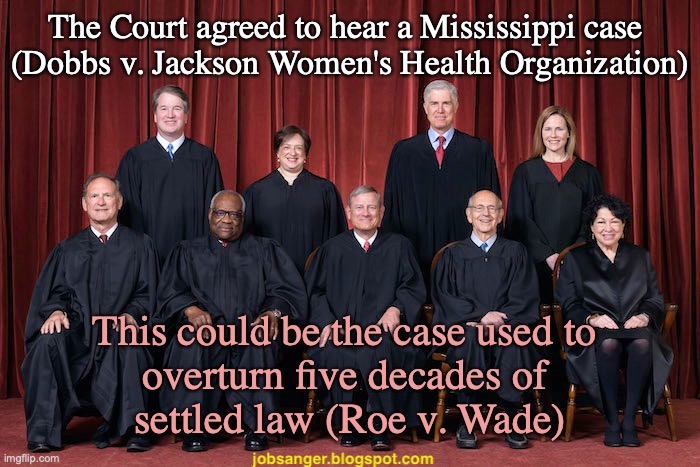 The Supreme Court has agreed to hear Dobbs v. Jackson Women's Health Organization. This case concerns a Mississippi law that would virtually ban abortions in that state. Many believe this could be the case that the Court (now with a 6 to 3 right-wing majority) uses to overturn Roe v. Wade (which has been in effect for nearly 50 years). They might be right.

Consider this article by Robin Marty for NBC News:

The Supreme Court announced Monday that it will hear oral arguments in a Mississippi abortion case — Dobbs v. Jackson Women's Health Organization — that would completely ban the procedure at 15 weeks after the start of a woman's last period before conception, with no exceptions for victims of sexual assault. Advocates and activists on both sides of the abortion divide have said this is a signal that the court is ready to overturn Roe v. Wade — but we've heard that so many times before.

Unfortunately, this time they are right.

The Supreme Court's decision to hear arguments in the Dobbs case is a completely different beast when it comes to Roe, the 1973 decision that legalized abortion in every state. One of the major precepts of Roe is that a state cannot ban abortion before fetal viability — a point that all mainstream medical doctors pinpoint at no earlier than 26 or 27 weeks' gestation, although there are a handful of very rare cases of survival as early as 22 weeks.

Over the last 48 years, the right has been able to only chip away at the viability tenet of Roe, usually by introducing restrictions that would delay patients' ability to access first-trimester abortions, including mandatory waiting periods, parental consent for minors and limits on the types of medical providers able to offer care or the types of buildings able to be used as abortion clinics.

These laws all turned into court challenges — like Planned Parenthood v. Casey, Whole Women's Health v. Hellerstedt and last year's June Medical Services v. Russo — that resulted in a narrower set of circumstances under which a person could terminate a pregnancy but never specifically ended the right to a legal abortion before fetal viability.

Dobbs is different: It declares that a fetus is "viable" at 15 weeks after a woman's last period — despite all medical evidence to the contrary — and the Supreme Court has essentially agreed that this argument is worth considering.

Let me be clear: There is absolutely no way a fetus can survive outside the womb at 15 weeks' gestation. There is no medical apparatus that can keep it alive, because the lungs of a 4-inch fetus at 15 gestational weeks are not developed enough to inflate, even if it were to be put on a respirator. Yet at least four members of the Supreme Court believe this case deserves to be heard; it will take just five justices to make a decision that could end the right to an abortion in as many as half of the states.

Thus, where the other court challenges pared away at edges of Roe, Dobbs lunges straight at its heart.

If Roe's viability standard — the crux of the decision that makes most abortions legal in the U.S. today — is overturned as a result of Dobbs and the question of abortion's legality is returned to the states, here is what Americans could immediately expect.

About two dozen states have already passed restrictions that would make abortion either completely illegal or illegal after cardiac activity develops in an embryo (so-called "heartbeat bans"), which is at six weeks' gestation (or about four weeks after conception, and slightly before a fetus develops eyes, lungs or a digestive system). In practice, that would mean no one could access legal abortions in any of these states, and they would have to travel other states if they wanted to terminate pregnancies.

For those of us who live in the Deep South, legal abortion would all but cease to exist. Just one state — Florida — would allow abortion (assuming it, too, did not change its laws), and it would be the sole viable location for anyone in Louisiana, Alabama, Georgia or Mississippi. The end of Roe would force people into multiday journeys by car that cover hundreds of miles, with costly flights to Chicago, Denver or Washington, D.C., as the next most accessible options.

Sadly, the end of Roe would not mean an evenly spaced patchwork of abortion-permissible and abortion-free states. Instead, it would create an entire region that is left completely behind, and not for the first time.

If the Supreme Court chooses to overturn Roe — if states are once again allowed to pick and choose whether they want abortion to be a legal medical procedure — the result will be a matter of life and death for those of us who are here. In the South, we are twice as likely to die in childbirth as in states to our north, and our infant mortality rates are similarly as high. We lack the investment in our states to keep hospitals open and the incentives to keep medical providers working there. And while the rest of the country has moved on to debating "Medicare for All," we are still desperately hoping for the Affordable Care Act's Medicaid expansion to go through, even though it has been more than a decade since Obamacare passed.

A third of the country would not just lose its right to bodily autonomy. It would also being forced by the state to carry unwanted, potentially dangerous pregnancies to term into an underresourced, purposefully neglected and utterly inadequate medical system in which both those who are pregnant and the resulting infants run the very real risk of dying in the process.