Is The War Just To Keep Netanyahu And Hamas In Power? 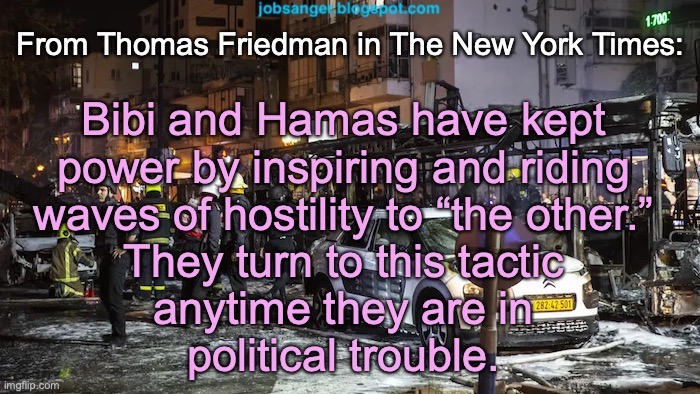 The following is just part of a column by Thomas Friedman in The New York Times. It will make you think!

Bibi and Hamas each exploited or nurtured their own mobs to prevent an unprecedented national unity government from emerging in Israel — a cabinet that for the first time would have included Israeli Jews and Israeli Arab Muslims together.

Both Bibi and Hamas have kept power by inspiring and riding waves of hostility to “the other.” They turn to this tactic anytime they are in political trouble. Indeed, they each have been the other’s most valuable partner in that tactic ever since Netanyahu was first elected prime minister in 1996 — on the back of a wave of Hamas suicide bombings.

No, Hamas and Bibi don’t talk. They don’t need to. They each understand what the other needs to stay in power and consciously or unconsciously behave in ways to ensure that they deliver it.

The latest rerun of their long-running nasty show is happening now because both were staring at an amazing breakthrough shaping up between Israeli Jews and Israel Arab Muslims — and, they wanted to destroy the possibility of political change before it could destroy them politically. . . .

In the wake of Israel’s fourth election, and Netanyahu’s failure to form a government, an unprecedented national unity coalition was taking shape in Israel — under the leadership of the secular-centrist Yair Lapid and the religious-rightist Naftali Bennett. They were on the verge of forging a cabinet that would include both Israeli Jews and, for the first time ever, an Israeli Arab Islamist party.

Here is the headline in Israel’s Haaretz newspaper online from last Sunday, May 9, just before the latest Hamas-Israel conflict erupted in full: “Israel Coalition Talks: Bennett’s Party Expects to Form Gov’t ‘This Week,’ After Meeting With Islamist Leader.”

The story went on to say that, “Bennett met with United Arab List Chairman Mansour Abbas Sunday, leading members of his party to believe that a government may be formed ‘this week,’ ending Israel’s political deadlock after four elections in under two years.”

The United Arab List, also known as Raam, headed by Mansour Abbas is an Israeli Arab “Islamic movement” party that comes from the same broad realm of political Islam that Hamas does, except that it is nonviolent; recognizes Israel; and is focused on getting Israeli Arabs — particularly Muslim Bedouins — more resources, more police and more jobs for their towns and neighborhoods in Israel, just the way ultra-Orthodox Jewish Israeli parties do. . . .

I warned that Netanyahu — who is desperate to stay in power and avoid possibly going to prison if he is convicted in his current corruption trial — was not above “inflaming the situation so much that his right-wing rivals have to abandon trying to topple him and declare instead that this is no time for a change in leadership.”

And within 48 hours of fighting that is exactly what happened. Bibi frightened Bennett away from forming a coalition with an Israeli Arab party, not to mention centrist and progressive Israelis, and Mansour Abbas was put in an impossible situation by Hamas by looking like he was collaborating with Israeli Jews who were hammering Palestinians from Jerusalem to Gaza.