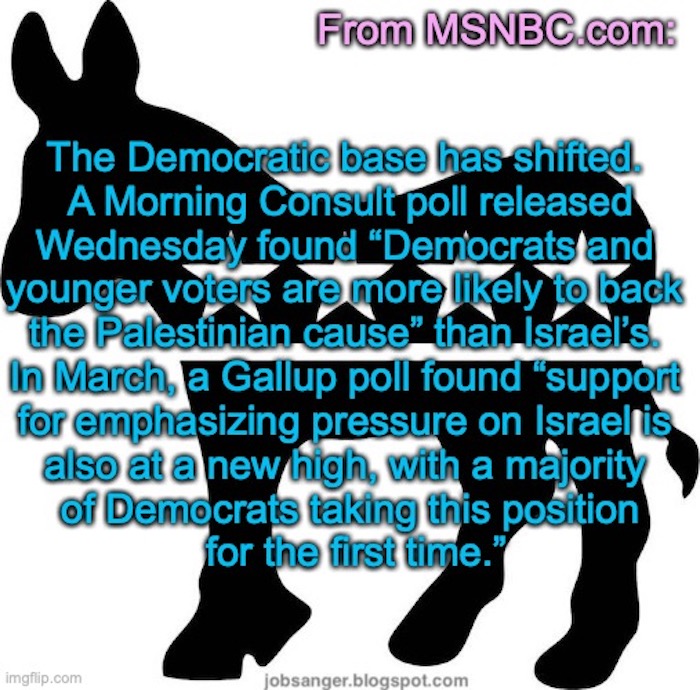 One of the biggest stumbling blocks to solving the Israeli-Palestinian crisis has been the overwhelming support for Israel (no matter what they do) among the U.S. population, and the dismissal of Palestinian rights. This has been true regardless of other political beliefs, with even Democrats solidly in the Israeli camp.

That is starting to change. With Israel continuing to steal Palestinian land to set up illegal settlements, Israel denying human rights to Palestinians (both in Israel and among the Gaza/West Bank Palestinians), and Israeli refusal to negotiate a true two-state solution, many Americans are moving to support the Palestinian cause. This is especially true of Democrats.

The following is part of an op-ed written by Medhi Hasan for MSNBC.com:

On Thursday, at 7 p.m. ET, Israel and Hamas began a “mutual and simultaneous” cease-fire after 11 straight days of airstrikes and rocket attacks. In Gaza, more than 230 people were killed. In Israel, 12 people lost their lives. As of now, that fragile calm is holding. . . .

In many ways, the latest Gaza violence was a carbon copy of the wars of 2008-2009, 2012 and 2014: the lopsided death toll; the horrific destruction of infrastructure; the global outrage and condemnation.

This time, though, there was one major difference. This time we watched as the Democratic Party, which now controls both the executive and legislative branches of the United States government, seemed to shift its position on Israel before our eyes.

Progressives, of course, have led the charge. Last week, members of “the squad” lined up on the House floor to denounce Israel’s actions in the occupied territories. . . .

The next day, Sen. Bernie Sanders, I-Vt., penned a blistering op-ed in The New York Times, insisting the United States “no longer be apologists for the right-wing Netanyahu government and its undemocratic and racist behavior” and concluding with the words: “Palestinian lives matter.”

But it wasn’t only “the squad” or the Senate’s only self-declared socialist who took Israel to task. For the first time in my life, pro-Israel Democratic Party hawks in Congress publicly criticized the Netanyahu government’s actions in the occupied Palestinian territories — mildly and tentatively, yes, but criticism, nevertheless. . . .

So what happened? Well, for a start, former President Donald Trump’s embrace of the Netanyahu government happened. The Donald’s greenlighting of Israeli annexation and settlements, coupled with Bibi’s lavishing of praise on Trump and his alliance with "the Israeli Ku Klux Klan" at home, made support for Israel much more of a partisan issue. The Trump-Netanyahu axis effectively gave many Democrats permission to criticize Israel’s actions in ways they would have never dreamt of before.

Growing diversity in Congress helps: Nearly 1 in 4 members are people of color, compared to 1 in 10 just two decades ago. Do you think it’s a coincidence that some of the most critical voices of Israel right now are Black and brown Democrats in the House? More and more Black Democrats in particular, such as Rep. Cori Bush, D-Mo., are drawing a straight line between Black Lives Matter protestsagainst racial discrimination and police violence here in the United States and Palestinian protests against racial discrimination and police violence in the occupied territories.

The Democratic base has shifted too, moving to the left not just on taxes, health care and immigration. A Morning Consult poll released Wednesday found “Democrats and younger voters are more likely to back the Palestinian cause” than Israel’s. In March, long before the latest flare-up, a Gallup poll found “support for emphasizing pressure on Israel is also at a new high of 34 percent, with a majority of Democrats taking this position for the first time.”

Don’t get me wrong. There is still a long way to go before the United States government takes a more even-handed approach to Israel and the Palestinians. . . .

Yes, the Democratic Party continues to be dominated by PEP — “progressive except Palestine” — politicians, from the president on down. Nevertheless, as countless news stories have documented in recent days, the party’s stance is changing.

“The shift is dramatic; it's tectonic," veteran pollster John Zogby, who himself is Arab American, told the BBC, explaining how support for the Palestinians has become “a major wedge issue, particularly among Democrats, driven by nonwhite voters and younger voters, by progressives in general.”

So this particular political genie is now out of the bottle. No matter how hard supporters of Israel’s airstrikes or occupation might try, it isn’t going back in.