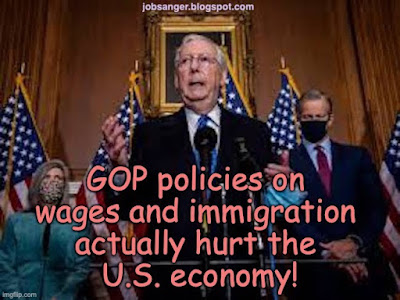 For several years now, the Republican Party has pursued an anti-immigration policy. They would have you believe that hordes of undocumented immigrants are flooding the country and taking jobs away from citizens.

That is not true. The jobs these immigrants take are not jobs that American citizens want, or would take. They are dirty, dangerous, and low-wage jobs -- sometimes even below the nation's established minimum wage. The immigrants can't complain about the working conditions or the pay, because they fear they would be deported -- and their employers know that. Many actually prefer to hire the immigrants for that reason.

Of course, there would be an easy way to fix those jobs so citizens would want them -- just inspect the work-sites to make sure they are safe, and mandate a $15 an hour minimum wage. But the same Republicans that oppose immigration also oppose raising the wage to a livable wage and mandating work place safety. They want to to believe U.S. businesses couldn't afford that.

And the GOP policies fail to take into account future needs. The birthrate in the U.S. has dropped for the last six years in a row. With more citizens retiring and the Social Security age population growing, the United States does not have a sufficient birth rate to compensate for that. The country needs an increase in the working-age population, and the current birth rate will not provide that.

That means we need more immigrants -- not less. Cutting off immigration and deporting hardworking immigrants will actually hurt the economy. If the Republicans really cared about creating a strong and sustainable economy (as they claim), they would abandon their current anti-immigrant and low-wage policies. The economy cannot continue to grow with the current GOP policies in place.