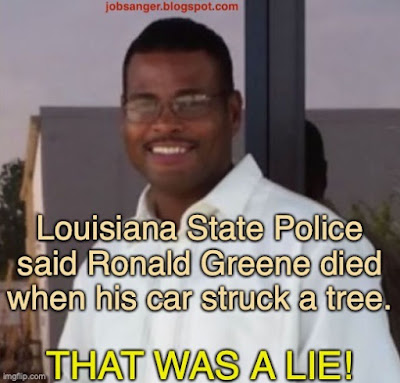 We are only a couple of days past the anniversary of George Floyd's murder by police, and sadly, nothing has been done on the federal level to reform police departments in the country.

In fact, more incidents of unnecessary police violence is being uncovered.

More than a year ago, Ronald Greene died after a police chase in Louisiana. The Louisiana State Police said he died when his car struck a tree at the end of that chase. That was a lie!

Video has been recently released that shows Greene was repeatedly tased and beaten after being taken into police custody -- and that was far more likely to have been the cause of his death. In other words, it was another police murder!

At the very least, this is just one more incident showing that police reform is needed in the United States. Far too many people are killed by the police in the U.S., and far too many of them are minorities (especially Blacks).

The following editorial was written by the editorial board of The Washington Post:

RELATIVES OF Ronald Greene said authorities initially told them he died on impact after he failed to pull over for a traffic violation, was chased by Louisiana state troopers and crashed his vehicle into a tree shortly after midnight on May 10, 2019. A one-page statement later issued by police said he was taken into custody after struggling with troopers, became unresponsive and died on the way to the hospital. We now know, thanks to body-cam footage obtained by the Associated Press, that there is far more — horrifyingly more — to the story of how this 49-year-old Black man died. And once again, troubling questions are raised about the conduct, character and credibility of police that underscore the need for reform.

“Okay, okay. I’m sorry. I’m scared. Officer, I’m scared, I’m your brother, I’m scared,” Greene can be heard telling the White troopers as he is subjected to agonizing and brutalizing treatment. He was repeatedly jolted with a stun gun, wrestled to the ground, put in a chokehold, punched in the face and dragged by shackles on his ankles as he lay on the ground. He was left unattended, handcuffed and prone for several minutes — a practice that use-of-force experts deem as dangerous. According to the autopsy, he died due to “cocaine induced agitated delirium complicated by motor vehicle collision, physical struggle, inflicted head injury, and restraint.” But no manner of death was specified and, according to the AP, police withheld basic documents from the coroner. “Does not add up” was the judgment of the emergency room doctor who questioned the initial account that Greene had died on impact as result of a car crash.

The shifting stories and secrecy smack of a coverup. State police at one point argued the use of force was justified — “awful but lawful” — and did not open an administrative investigation until 474 days after Greene’s death. Troopers so far have faced limited repercussions: The officer who dragged Greene by his ankles was given a 50-hour suspension and returned to active duty. A federal investigation is now underway that could hold law enforcement accountable. The family has also filed a wrongful-death suit.

Greene’s death came a year before that of George Floyd and the release of the video footage coincided with the first anniversary of Floyd’s murder, a case that put an international spotlight on the police brutality that has long victimized Black people. It’s impossible to watch the graphic video of Greene pleading to police and not think of Floyd crying for help under the knee of a Minneapolis police officer. How many other cases are there of Black people needlessly killed by police where no video exists that would undermine the official police accounts?

In the wake of Floyd’s death, there have been some modest police reforms on the state and local levels, but federal legislation has stalled in the Senate over disagreement about eliminating the qualified immunity that shields police officers. “I beat the ever-living f--- out of him,” one trooper said of Ronald Greene in chatter picked up on his body-camera mic.

The system is broken, and it is time to fix it so that the people who need protection get it.