The Party Of Subversion Doesn't Want An Investigation 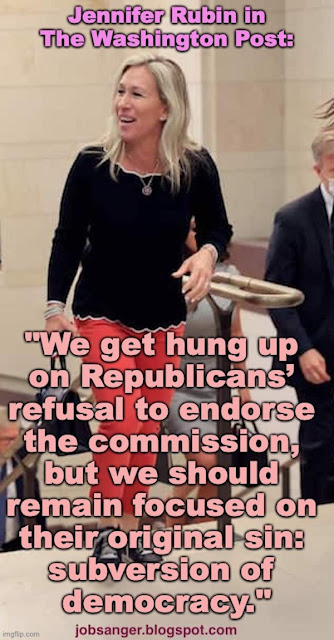 Republicans in Congress don't want a committee to investigate what happened on January 6th. I don't blame them. Such an investigation would embarrass them. It would expose them as being anti-democracy -- the party of subversion.

Here's how Jennifer Rubin sees it in The Washington Post:

The Republican Party refuses to investigate the most violent act of insurrection since the Civil War because it might make the party look bad.

Think about that. It would look bad because it would be obvious that their cult hero (not antifa, not tourists) incited a MAGA mob — and because House Minority Leader Kevin McCarthy (R-Calif.), who pleaded with the president to call off the rioters at the Capitol on Jan. 6, would be compelled to testify. He might then have to explain why he still takes direction from someone who betrayed his oath.

A commission would look bad for the GOP because it would short-circuit the “big lie” that the 2020 election was stolen, confirming that this effort at subterfuge was intended to assuage the ego of a dangerous man-child. The “optics,” as they say, would be bad because the GOP’s continued refusal to renounce its disgraced former leader would affirm its willingness to open the country up to another violent insurrection. It would also look really bad if some members of Congress were shown to havecommunicated with the Jan. 6 attackers. We get hung up on Republicans’ refusal to endorse the commission, but we should remain focused on their original sin: subversion of democracy.

With or without the commission, the Republican Party is a danger to the republic. And that gets back to the central question as to why any respectable patriot remains in the party. The GOP of Ronald Reagan, of John McCain, of Mitch Daniels does not exist. But don’t take my word for it.

Former defense secretary Robert Gates said on “Face the Nation” on Sunday that “the values and the principles that the Republican Party stood for” under five Republican presidents are “hard to find” in today’s GOP. Well, that’s one way of putting it. Another is that the GOP is no longer a political party with the aim of democratic governance, but a cult that spews lies and hatred to rile up its White base and retain power. Simply because McCarthy and his henchmen sound less loony than Rep. Marjorie Taylor Greene (R-Ga.) is no reason to treat them like normal politicians.

Greene is a quintessential Republican — not an outlier — in her resort to nutty conspiracy theories. When she recently declared that covid-19 restrictions were akin to the Holocaust, Rep. Liz Cheney (R-Wyo.) called this “evil lunacy.” Cheney is right, but she might also acknowledge that this is an apt descriptor of a party that tolerates MTG, as Greene is known, and spreads its own hateful falsehoods (e.g., the rioters were tourists, not scary like those Black Lives Matter protesters). It is evil lunacy to try to bring down a democracy by resorting to lies about elections. . . .

MTG is not an aberration, but a distillation of today’s GOP.

Cheney and other Republicans who ostensibly remain in the party to save it from itself need a rendezvous with reality. In their futile effort to preserve a GOP that no longer exists, they risk putting back in power the menace to the rule of law and democracy that Cheney and others recognize. When confronted with evil lunacy — in colleagues who are in a position to subvert the country’s most cherished values — the only moral choice is to defeat them. Only after their electoral wipeout can America be saved. And that, not the GOP’s salvation, must be the highest priority.