There Won't Be A Bipartisan Infrastructure Bill 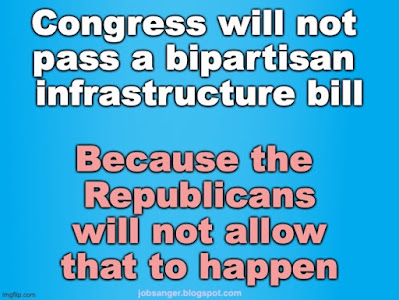 The talking heads on cable news have been playing up the "negotiations" between President Biden and the Republicans in Congress regarding an infrastructure bill. But don't be fooled. There is no chance that a bipartisan bill make it through Congress.

That's because the Republicans don't want a bipartisan bill. The offers they have made were far below what President Biden has asked for. They intentionally lowballed their offers because they know Biden can't accept them. And frankly, if he did accept one, the GOP would find a way to oppose it. They don't want a bill.

Why? Because they think that any infrastructure bill passed and signed into law would be viewed as a victory for President Biden, and they can't allow that to happen. They need the Biden administration to fail, which is why they are opposing everything the President tries to do. If they can brand Biden as a failure, they think that will give them control of Congress in the 2022 election.

Here is how Paul Waldman puts it in his column in The Washington Post:

Politics in Washington is full of playacting, but few recent charades have been as absurd as the extended negotiation between Democrats and Republicans over whether they can agree on a bipartisan infrastructure bill. . . .

Let’s start by considering three possible outcomes of this effort. First, Congress could pass a meaningful infrastructure bill with support from members of both parties. This is what both sides say they want (though that isn’t quite true, which we’ll get to in a moment).

Second, Democrats could pass an infrastructure bill with zero Republican votes. This is probably what will end up happening, provided that Sens. Joe Manchin III (D-W.Va.) and Kyrsten Sinema (D-Ariz.), self-appointed guardians of bipartisan compromise, can be persuaded that the effort to win the support of Republicans was performed with sufficient enthusiasm.

Third, the bill could fail altogether, either because Manchin or Sinema pulls their support, or because a Democratic senator falls ill and can’t vote for it in the 50-50 Senate, or for some other reason.

Here’s where we get to the important part. This is how President Biden would rank those three outcomes in order of his own needs and desires:

And here’s how Republicans would rank those outcomes in order of their needs and desires:

As you can see, they’re precisely reversed. Which is a big problem if you’re hoping for an agreement.

If the bill passes on a bipartisan basis, Biden gets a double victory: He can claim a big legislative win, and also tell voters that he has achieved his goal of bringing cooperation back to Washington. He’ll have done what other presidents failed to do, breaking the partisan logjam and showering benefits on communities across the country for years to come.

Which is precisely why that’s the least desirable outcome from the GOP’s perspective: Biden will get the credit, and voters will be a little less likely to believe that Washington can’t get anything done. That would be terrible for Republicans, since dysfunction and gridlock increase voter dissatisfaction and produce a big win for the opposition party in midterm elections.

If the bill fails, on the other hand, it’s a huge win for the GOP, a black eye for Biden, and proof that Democratic rule isn’t delivering for people. They show their own partisans that they’re mounting an effective opposition, and show everyone else that Biden is ineffectual and weak. . . .

Hold on, you might say: Why am I not giving Republicans more credit for sincerely wanting infrastructure to happen? Don’t their constituents need better roads and sewer systems and broadband? Wouldn’t they like to see those people’s lives improved?

Sure they would. But if their sincere desire for infrastructure held any real power for them — if it was more than just “I guess we could do that, but I’m not going to put much effort into it” — then they would have done it when Donald Trump was president.

After all, in the first two years of Trump’s presidency they had control of both houses of Congress. But they didn’t pass an infrastructure bill. They and Trump kept claiming they would — to the point where “Infrastructure Week” became a running joke — but they never did it. Once they passed their big tax cut for corporations and the wealthy, they stopped bothering to do much legislating at all.

There is no outcome, substantive or political, that Republicans would rather have than to see the infrastructure bill go down in flames. Democrats could let them write every word of it, and that would still be true.

Which is why there will be no bipartisanship on this subject. And on every other important piece of legislation during the Biden presidency, the calculation will be just the same.