Trying To Negotiate With Congressional GOP Is Pointless 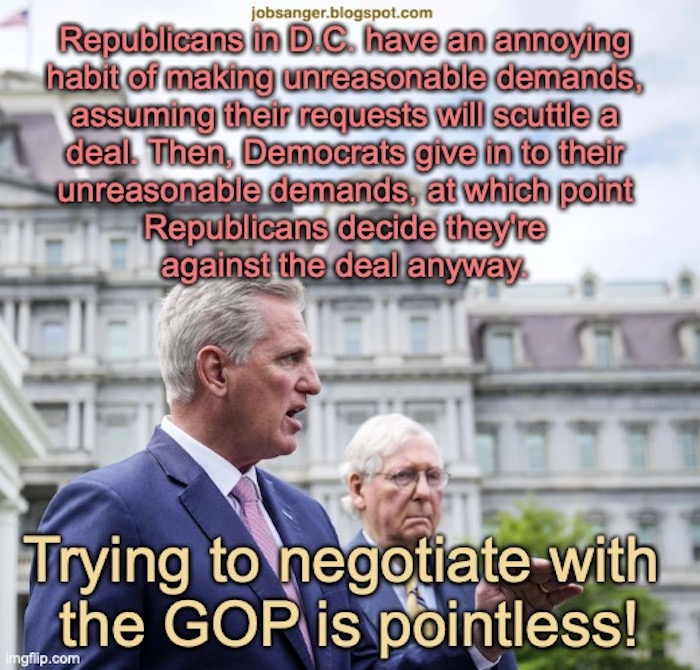 House Minority Leader Kevin McCarthy demanded that Democrats give in to Republican wishes regarding the proposed January 6th Investigation Committee. Democrats agreed to what McCarthy wanted. So what happened? McCarty (and his Senate counterpart - McConnell) came out in opposition to the committee anyway.

It points out a fact that has grown very clear. The congressional GOP is really not interested in negotiating. They only want to oppose everything the Democrats try to do. Trying to negotiate with them is pointless, and it's time Democrats realize this -- and get down to governing without the Republicans.

The following article is by Steve Been at MSNBC.com:

We saw this in 2014, for example, when Republican insisted that then-President Barack Obama embrace something called "chained CPI" -- a controversial change to how Social Security benefits are calculated -- as part of a long-term debt-reduction deal. The White House reluctantly agreed, at which point Republicans criticized their own idea and walked away from the negotiating table.

We saw it again throughout Donald Trump's term, especially on the issue of immigration. Even after congressional Democrats, desperate to protect Dreamers, offered him tens of billions of dollars to construct a giant border wall, the Republican balked.

Yesterday, it happened again, when House Minority Leader Kevin McCarthy (R-N.Y.) announced his opposition to a bipartisan deal on creating a Jan. 6 commission.

By all accounts, there's no real ambiguity as to what happened. The House GOP leader encouraged one of his allies to work on a deal, and McCarthy made sure to include unreasonable demands he expected Democrats to reject. Instead, the minority leader's ally "secured almost all the concessions McCarthy had sought."

And yet, McCarthy wouldn't take "yes" for an answer. In fact, last night, House Minority Whip Steve Scalise (R-La.) formally notifiedhis members that the GOP leadership is recommending a "no" vote on the agreement Republicans helped negotiate.

To be sure, we know why. Donald Trump, for example, is demanding that the debate over a commission come to an immediate end, and McCarthy is reportedly scared about having to be a key witness in the investigation.

While we wait for the final outcome, the lesson should be obvious: negotiating with Republican leaders is generally pointless. There's no shortage of issues on which President Joe Biden and congressional Democrats are ready to deal -- infrastructure, voting rights, immigration, et al. -- but they're working with GOP counterparts who've proven they won't take "yes" for answer.

All of which leads to the inevitable question of why Democrats even bother, when they have the option of trying to govern without them.