UFO's Are Real - But That's Not Proof Of Alien Spacecraft 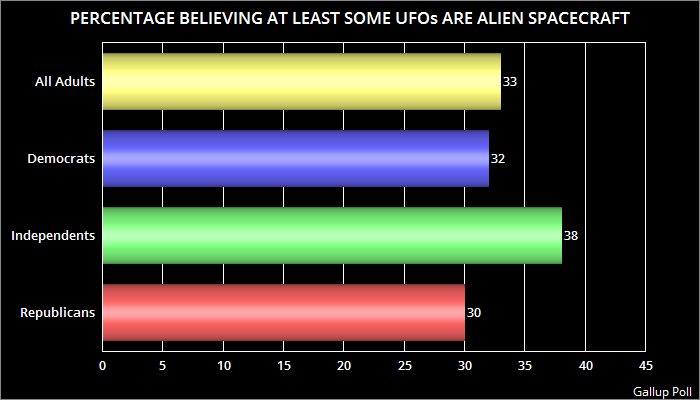 Appearing on The Late Late Show a few days ago, Barack Obama said: In addition,

"What is true, and I'm actually being serious here, is that there are, there's footage and records of objects in the skies, that we don't know exactly what they are. We can't explain how they moved, their trajectory. They did not have an easily explainable pattern. And so, you know, I think that people still take seriously trying to investigate and figure out what that is."

In addition, the Department of Defense recently released three videos taken by Navy pilots. The videos showed flying objects that have not been identified, and admitted that for a couple of years these sightings were an almost daily occurrence.

To be blunt -- While there is evidence of the existence of UFO's, there is absolutely NO EVIDENCE of alien spacecraft having visited this planet!

In spite of that, about a third of the United States population believes that at least some of the UFO's are alien spacecraft. The chart above illustrates this. It is from a Gallup Poll done in August of 2019 of a national sample of 1,522 adults, with a 3 point margin of error. Interesting is the fact that this belief crosses political lines -- with roughly equal percentages of Republicans, Democrats, and Independents believing it.