U.S. Police Don't Get Enough Or Right Kind Of Training 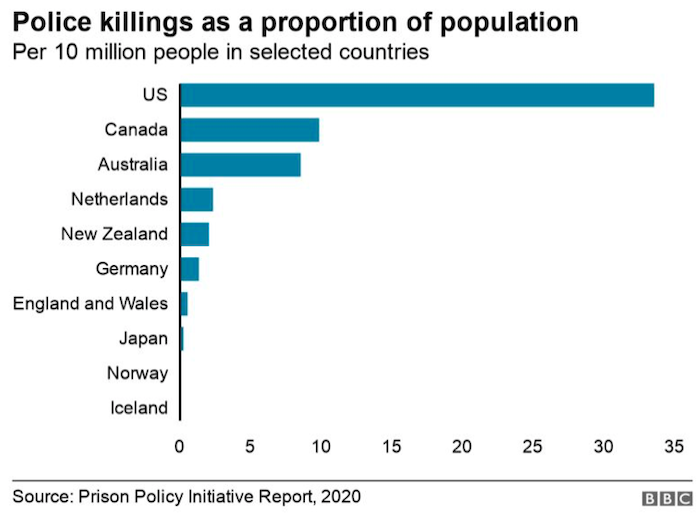 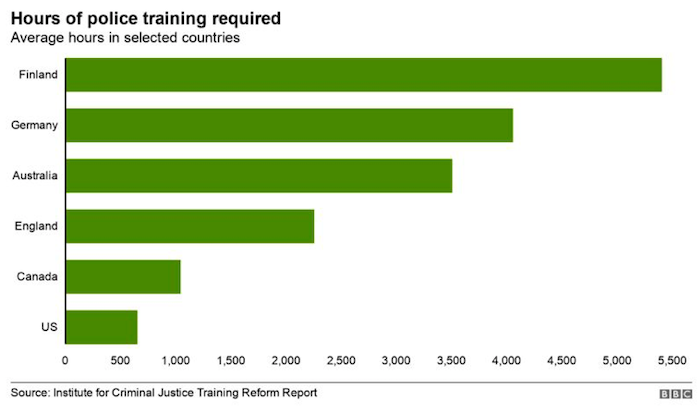 Police in the United States kill about 1,000 people every year -- and about 10% (or about 100) of those killed are unarmed. And they kill minorities (especially Blacks) in numbers far larger than their percentage of the population. This should be unacceptable to all Americans.

Part of the reason is racism. The departments don't do a good enough job of weeding out the racists in the hiring process. Another part is the proliferation of guns in the country. The U.S. has about half of the worlds guns that are in the hands of civilians, and it's easy for anyone to get a gun (even criminals and others who shouldn't have one). This makes life more dangerous for both police officers and civilians.

The two charts above show the problem. The top chart shows that the rate of police killings in the U.S. (per 10 million people) is much higher than in other countries. The second chart shows us something that could be the biggest driver of this abnormally large rate of police killings -- the amount of training an officer gets before being put on the streets. And not only do U.S. police receive far less training than in other countries, but they don't receive the right kind of training.

Consider this part of an article by Jake Horton at BBC.com:

There are around 18,000 police agencies in the US, but with no national standards on training, procedures and timescales vary across the country.

On average, US officers spend around 21 weeks training before they are qualified to go on patrol.

That is far less than in most other developed countries, according to a report by the Institute for Criminal Justice Training Reform (ICJTR).

The report looked at police training requirements in more than 100 countries and found that the US had among the lowest, in terms of average hours required.

Also, many other countries require officers to have a university degree - or equivalent - before joining the police, but in the US most forces just require the equivalent of a high-school diploma.

In England and Wales, it has recently become mandatory for officers to have an academic degree.

Maria Haberfeld, professor of police science at the John Jay College of Criminal Justice, says: "Some police forces in Europe have police university, where training lasts for three years - for me the standouts are Norway and Finland."

Finland has one the highest gun-ownership rates in Europe, with around 32 civilian firearms per 100 people - but incidents of police shooting civilians are extremely rare.

US police academies spend far more time on firearms training than on de-escalating a situation - 71 hours against 21, on average, according to a 2013 US Bureau of Justice Statistics report.

And in the US, the escalation of force is at the discretion of the officer, whereas in countries such as Norway and Finland, there are more rigorous rules as to what is considered justified use of force.

Prof Haberfeld says: "Most of the training in the US is focused on various types of use of force, primarily the various types of physical force. The communication skills are largely ignored by most police academies.

"This is why you see officers very rapidly escalating from initial communication to the actual physical use of force, because this is how they train.". . .

The US spends almost 1% of its GDP on policing - and some activists are calling for this to be cut and directed to other services.

But Mr Shrewsberry says: "Unfortunately, when we look at defunding or budget cutbacks, training divisions are often the earliest to be hit."