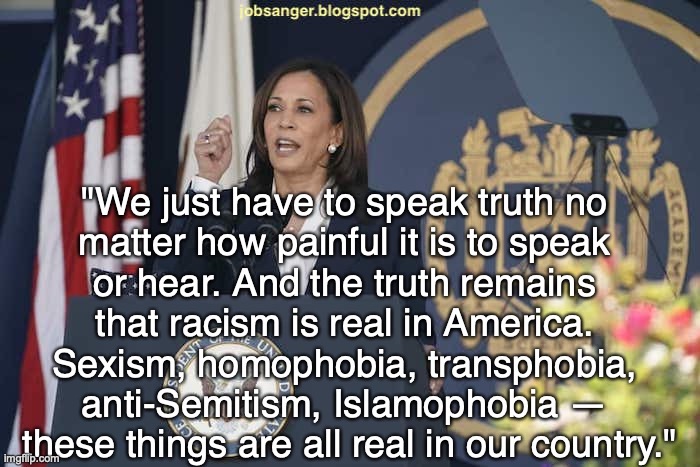 Republican state legislatures across the country are busy trying to whitewash United States history. They don't want our schools to teach the uglier parts of our history (like slavery, racism, genocide, discrimination, etc.). It's an effort to preserve their power, which is based in white supremacy.

But it's time to move past that and embrace a belief in equality for all citizens, and then make that equality a reality in this country. But that cannot happen until and unless the face (and teach) the truth about our history -- warts and all.

Recently, Jonathan Capehart interviewed Vice-President Kamala Harris. The following is part of his column written after that interview:

“We just have to speak truth no matter how painful it is to speak or hear,” Harris told me Friday during a telephone interview. “And the truth remains that racism is real in America. Sexism, homophobia, transphobia, anti-Semitism, Islamophobia — these things are all real in our country. To speak it doesn’t mean that it is about a wholesale attack on the country. But it certainly is about saying, ‘Look, let’s also not approach this with a sense of naivete or denial.’”

Harris is the first Black person, first South Asian and first woman elected vice president, which explains why Harris said, “I feel a heavy weight of responsibility to use the bully pulpit I have in a way that is about elevating public discourse and engaging in public education about issues that [others] may not have thought about or haven’t been presented with a certain perspective.”

That perspective is invaluable, especially this week. For in the annals of America’s fraught history with race, this seven-day period we are now in is most wretched because of what we must remember.

May 25 marked one year since the murder of George Floyd by a White Minneapolis police officer. May 31 and June 1 will mark 100 years since the Tulsa race massacre that killed as many as 300 Black people in a hail of bullets and airdropped turpentine bombs, and completely destroyed their prosperous Greenwood community known as Black Wall Street. In the sweep of history between those two tragic events, so much has changed, and yet too much remains the same.

But we talk more openly and honestly about race and racism today. That “we” includes President Biden and Harris. Many of their predecessors handled issues of race the way we tiptoe across the thinnest of ice — if they didn’t avoid them altogether. Biden and Harris are not afraid to take them head-on — perhaps because the omnipresent subject of race has become so unavoidable. . . .

What happened in Tulsa was more than a tragedy. Harris called it “a crime.” A crime that White Tulsa initially tried to blame on their Black neighbors before pretending it never happened. A crime that Black Tulsa and Black America would never forget. Harris told me it was “the intentionality” of the crime that stands out for her.

O.W. Gurley bought 40 acres of land in Tulsa in 1906 and called it Greenwood. The Black community that grew from it thrived despite Jim Crow laws meant to stunt Black citizenship and advancement. The intentionality involved in creating such success was met by the intentionality of White Tulsa to destroy it.

“This was not an accident. This was not a fight that got out of hand,” Harris said. “It was purposeful destruction.”

That 100-year-old crime and the 2020 murder of George Floyd speak to America’s never-ending cycle of progress and regression on matters of race. Harris believes we can break this cycle, “but in order to have significant change, there needs to be real, significant intervention.” That means tackling the racial wealth gap by addressing access to capital for minority-owned businesses, expanding homeownership and widening access to broadband. All issues Harris has been working on since taking office.

Still, deeds have to be matched by words. “So there are a lot of things that we need to do. But we have to speak truth, and I have to tell you that’s where we can’t let up. Again, no matter how difficult it may be to hear,” said Harris.

After four years of an administration that flooded the American people with white nationalism, White grievance and their attendant lies, speaking truth is exactly what this nation needs from the White House right now. And I’m all for Harris being unafraid to speak it.