Biden's Proposed Budget Is Both Radical And Modest 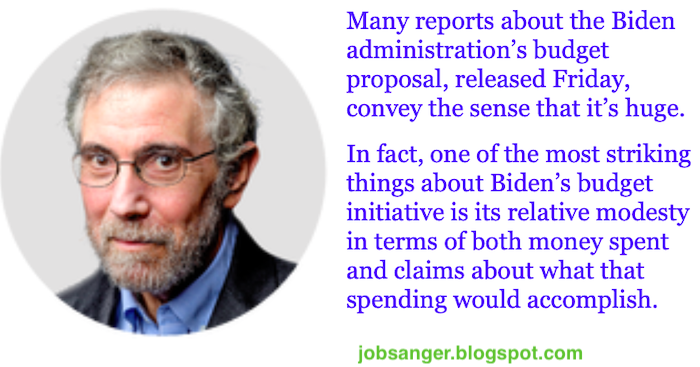 If all you know about President Biden's proposed budget is what you've heard from cable news or Republican politicians, then you might think it is a huge proposal that would bankrupt this country. That is simply not true. In fact, it is a relatively modest budget that's aimed at making life better for most American citizens.

The following is much of a column by Nobel Prize-winning economist Paul Krugman. In it, he tells the truth about President Biden's modest and necessary budget:

Many reports about the Biden administration’s budget proposal, released Friday, convey the sense that it’s huge. President Biden, scream some of the headlines, wants to spend SIX TRILLION DOLLARS next year. (Sorry, can’t help doing my best Dr. Evil imitation.) It takes some digging to learn that the baseline — the amount the administration estimates we’d spend next fiscal year without new policies — is $5.7 trillion.

In fact, one of the most striking things about Biden’s budget initiative — arguably about his whole administration — is its relative modesty in terms of both money spent and claims about what that spending would accomplish. He is neither proposing nor promising a revolution, just policies that would make Americans’ lives significantly better. . . .

Now, the Biden plan is by no means trivial. The budget proposes spending 24.5 percent of G.D.P. over the next decade, up from a baseline of 22.7 percent. That increase, mainly driven by increased expenditures for infrastructure and families, is bigger than it looks because so much of the baseline is devoted to the military, Medicare and Social Security. But it’s not socialism, either. It would still leave the United States with a smaller government than most other wealthy countries’.

Still, the extra spending would make a huge difference to some economic sectors, notably renewable energy, and vastly improve some American lives, especially those of lower-income families with children. . . .

Conservatives are constantly pushing the claim that tax cuts, in particular, will supercharge growth; they love to cite the supposed economic triumph of Ronald Reagan. But Reagan presided over only a couple of years of very rapid growth, as the economy recovered from a severe recession. Over the course of the 1980s, the economy grew only 0.015 percentage points faster — basically a rounding error — than it did in the troubled 1970s.

And looking more broadly across history at both the national and the state levels shows predictions that tax cuts will produce economic miracles have never panned out — not once. Neither, by the way, have predictions that tax hikes, like the increased levies on corporations and the wealthy that Biden is proposing, will lead to disaster.

So it makes sense for the Biden administration to avoid making big claims about economic growth. But does this mean that its plans are no big deal? Not at all.

You see, while government policies rarely have major effects on the economy’s overall growth rate, they can have huge effects on the quality of people’s lives. Governments can, for example, ensure that their citizens have access to affordable health care; they can drastically reduce the number of children whose lives are scarred by poverty. The Biden plan would take big steps on these and other fronts.

And this is the sense in which the Biden plan, despite its relatively moderate price tag, represents a radical departure from past economic policy.

For the past four decades, U.S. economic debate has been dominated by an ideology fundamentally opposed to spending money to help ordinary citizens: We can’t borrow more, lest we provoke a debt crisis. We can’t raise taxes on those able to pay, lest we destroy their incentive to create wealth.

The Biden budget, however, reveals an administration free from these fears. The budget doesn’t propose huge deficit spending, but it does point out that the burden of federal debt, properly measured, is minimal. And administration officials have made it clear that they don’t buy into low-tax propaganda.

You could say that the most important thing about this budget isn’t so much the dollars it would deliver as the dogma it dismisses. And if Biden’s presidency is seen as a success, this ideological liberation will have huge consequences.