There's No Evidence That UFO's Are From Another Planet 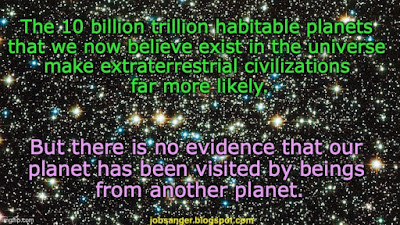 This is seen by some as proof that we are being visited by beings from another planet. But that is jumping to a conclusion that is not warranted. Just because an object can't yet be identified or explained doesn't mean it has an extra-terrestrial origin.

In fact, there is yet to be any evidence at all that the Earth has been visited by beings from another planet -- either now or in the past.

The following is most of an article on this subject by Dr. Adam Frank, a professor of astrophysics at the University of Rochester:

I’m an astrophysicist who is involved in the search for extraterrestrial intelligence. My colleagues and I were recently awarded one of the first NASA grants to look for signs of advanced technology on planets outside our solar system. (I’ve argued in these pages that the 10 billion trillion habitable planets that we now believe exist in the universe make extraterrestrial civilizations far more likely.)

I understand that U.F.O. sightings, which date back at least to 1947, are synonymous in the popular imagination with evidence of extraterrestrials. But scientifically speaking, there is little to warrant that connection. There are excellent reasons to search for extraterrestrial life, but there are equally excellent reasons not to conclude that we have found evidence of it with U.F.O. sightings.

Let’s start with the Navy cases. Some of the pilots have told of seeing flying objects shaped like Tic Tacs or other unusual forms. The recordings from the planes’ cameras show amorphous shapes moving in surprising ways, including appearing to skim the ocean’s surface and then disappear beneath it. This might appear to be evidence of extraterrestrial technology that can defy the laws of physics as we understand them — but in reality it doesn’t amount to much.

For one thing, first-person accounts, which are notoriously inaccurate to begin with, don’t provide enough information for an empirical investigation. Scientists can’t accurately gauge distances or velocity from a pilot’s testimony: “It looked close” or “It was moving really fast” is too vague. What a scientist needs are precise measurements from multiple viewpoints provided by devices that register various wavelengths (visual, infrared, radar). That kind of data might tell us if an object’s motion required engines or materials that we Earthlings don’t possess.

Perhaps the videos offer that kind of data? Sadly, no. While some researchers have used the footage to make simple estimates of the accelerations and other flight characteristics of the U.F.O.s, the results have been mixed at best. Skeptics have already shown that some of the motions seen in the videos (like the ocean skimming) may be artifacts of the cameras’ optics and tracking systems.

There are also common-sense objections. If we are being frequently visited by aliens, why don’t they just land on the White House lawn and announce themselves? There is a recurring narrative, perhaps best exemplified by the TV show “The X-Files,” that these creatures have some mysterious reason to remain hidden from us. But if the mission of these aliens calls for stealth, they seem surprisingly incompetent. You would think that creatures technologically capable of traversing the mind-boggling distances between the stars would also know how to turn off their high beams at night and to elude our primitive infrared cameras.

Don’t get me wrong: I’ll read with great interest the U.S. intelligence report about U.F.O.s that is scheduled to be delivered to Congress in June; I believe that U.F.O. phenomena should be investigated using the best tools of science and with complete transparency.

But there may be more prosaic explanations. For example, it’s possible that U.F.O.s are drones deployed by rivals like Russia and China to examine our defenses — luring our pilots into turning on their radar and other detectors, thus revealing our electronic intelligence capacities. (The United States once used a similar strategy to test the sensitivities of Soviet radar systems.) This hypothesis might sound far-fetched, but it is less extreme than positing a visit from extraterrestrials.

What’s most frustrating about the U.F.O.s story is that it obscures the fact that scientists like me and my colleagues are on the threshold of gathering data that may be relevant to the existence of intelligent extraterrestrial life. But this evidence involves subtle findings about phenomena far away in the galaxy — not sensational findings just a few miles away in our own atmosphere.

Powerful telescopes that will soon be operational may be capable of detecting city lights on the night side of planets that orbit distant stars or the telltale mark of reflected light from planet-wide solar-collecting arrays or the distinctive sign of industrial chemicals in a planet’s atmosphere. All of these “technosignatures,” should we find evidence of them, will be small effects. If we do detect such things, you better believe that my colleagues and I will go to extraordinary lengths to eliminate every possible source of error and every possible alternative explanation. This will take time and careful effort.

The work of science, though ultimately exciting, is mostly painstakingly methodical and boring. But that is the price we pay because we don’t just want to believe. We want to know.