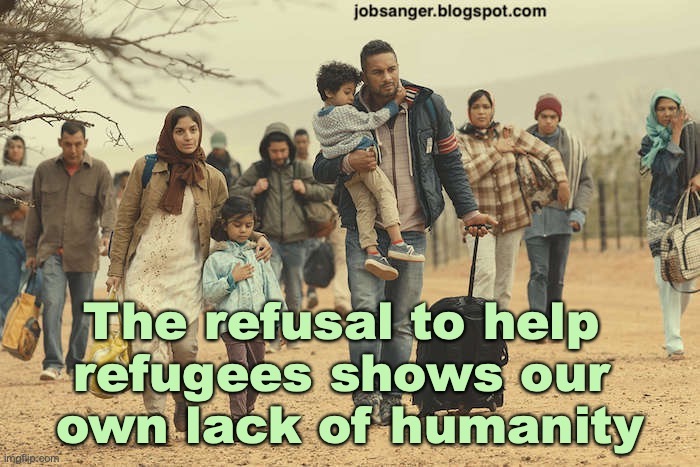 Recently, there has been a lot of media coverage about Haitian refugees at our Southern border. Sadly, it seems that the majority view is that these refugees should not be admitted to our country. Too many Americans view these refugees as somehow different from us, and letting them into the country would somehow hurt the country.

This is not the only refugee crisis that has evoked this kind of feeling. Refugees from many other parts of the world have been denied entry, and many even think they do not deserve our help in any way. They are wrong.

Who are the refugees. In spite of what many think, refugees are people just like us. Most of them had jobs -- they were construction workers, sales people, lawyers, bankers, nurses/doctors, and many other professions. But something happened -- a natural disaster, war, or pogrom -- that destroyed their lives, and made it impossible for them to rebuild their lives where they lived. Others never had a chance to build a life because of discrimination or extreme poverty.

They are not trying to get anything for free or hurt the country. They just want a chance to rebuild their lives, and they are willing to work hard to do that. They will be good citizens and good neighbors if just given the chance.

Most religions, especially christianity, teach that helping the unfortunate is required. That makes it rather surprising that many of those who are not critical of refugees and most refusing to help them are religious people. Religion teaches to share what you have with those who need it, but too many have a different attitude -- it's more like, "I've got mine, so screw you!".

Refusing to help refugees shows an astounding lack of humanity. The refugees are not the monsters trying to hurt the country. The people refusing to help them are the inhumane monsters, especially in this country (built on welcoming immigrants and refugees).

In a country as rich as ours, this is inexcusable. We should be better than this!