Are Humans The Smartest Or Stupidest Species? 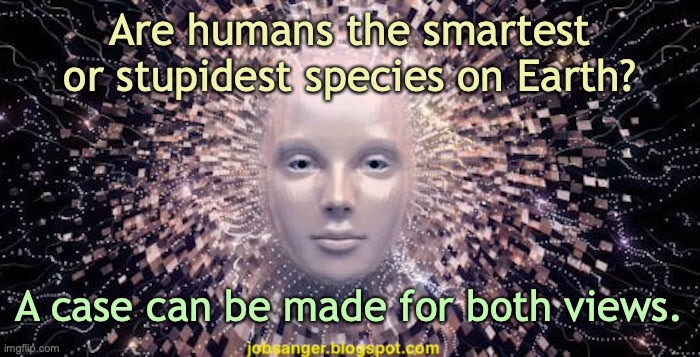 Whether you believe humans were created in their current form or are the result of millions of years of evolution, people seem to agree on one thing -- that humans are the smartest members of the animal kingdom.

After all, humans have built amazing things -- the Pyramids, modern skyscrapers, computers and the internet, machines that fly and some that even go to other planets. The list is endless of human accomplishments.

But a case can be made for the opposite view -- that humans are the stupidest members of the animal kingdom.

They have divided themselves into tribes and nations, creating arbitrary boundaries on the planet. And they use those boundaries to wage war with other tribes and nations. Millions have been killed in those wars, usually over greed or religion. And even within those tribes and boundaries, humans kill and maim each other. They do this even though common sense would dictate they should be helping each other.

Humans discriminate against one another because of silly reasons (like skin color, national origin, or religious preference) -- each convinced he/she is somehow better than others.

Humans, through misuse of natural elements, are in the process of making their planet uninhabitable -- deleting the forests that provide their oxygen, dirtying the water they need, and changing the climate to produce more storms, floods, droughts, and fires. And refusing to pressure their politicians into stopping or mitigating these disastrous things.

Humans allow poverty and neglect to exist -- even in countries with the wealth to eliminate both.

And humans refuse to believe their scientists and medical professional -- refusing to stop a killer pandemic by getting vaccinated or wearing masks.

So, which is it? Are humans the smartest or stupidest species? I think a case can be made that they are both -- and unless they enhance the former and eliminate the latter, they may not survive very far into the future. The Earth doesn't care. She will survive with or without us.

Humans must save themselves. Can they do it? They are capable of saving themselves, but do they have the will to do so? It will require putting a lot of our ignorant ideas behind us, and working together to the benefit of all. Frankly, I'm not sure we are that smart!