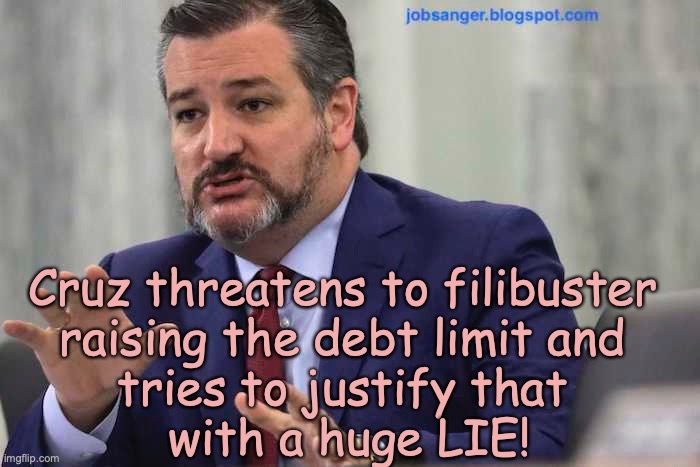 The House has passed a funding bill to keep the government running past September 30th. Included in the bill is a suspension of the debt limit (which needs to be raised pretty soon to keep the government from defaulting on its debts). The bill now goes to the Senate. But in the Senate, Ted Cruz has already said he would filibuster raising the debt limit -- and he has told a huge lie to justify that filibuster.

Steve Been explains at MSNBC.com:

Sen. Ted Cruz indicated last week that he intends to push the nation closer to a deliberate, self-imposed crisis, and as NBC News reportedyesterday, the Texas Republican isn't backing away from his threat to crash the economy on purpose.

Sen. Ted Cruz, R-Texas, promised to filibuster it, saying there is 'no universe' in which he would consent to allowing a simple majority vote on extending the debt limit.

The GOP senator added that extending the debt limit would make it "easier for [Senate Majority Leader] Chuck Schumer and the Democrats to add trillions more in debt."

That doesn't make any sense.

There are plenty of members of Congress who are badly confused about the substantive details of governing. As a rule, Cruz isn't one of them. I've long argued that the Texas Republican's principle political problem is not that he's dumb, but rather, that he assumes everyone else is dumb.

His comments on the debt ceiling capture the problem nicely. As Cruz surely knows, raising the debt ceiling allows the United States to pay its bills, not to clear the way for new spending. The process is about paying for the stuff Congress already bought in the past, not giving lawmakers approval to buy new stuff in the future.

The GOP senator, in other words, is preparing to block important legislation — a bill that would prevent the United States from defaulting on its obligations for the first time in our history — based on a rather obvious lie.

If Cruz follows through on his gambit and his effort succeeds, the results would be catastrophic. As The Washington Post's Catherine Rampell explained in her new column:

The government would have trouble paying Social Security checks, military salaries and all the creditors who'd previously lent money to Uncle Sam. A default would also violate the Constitution, which says 'the validity of the public debt of the United States ... shall not be questioned.' Finally, it would trigger chaos throughout the global financial system. Financial markets currently treat U.S. debt as virtually risk-free, with all other assets benchmarked against it. If we demonstrate that our debt is not really risk-free — that we're instead cavalier about repaying our creditors — panic would tear through other markets as well.

Again, Cruz knows this. So do McConnell and many other congressional Republicans. They've decided to play with matches anyway, even if it's their own country's economy that burns.