Girls Must Be Taught Early That They Can Be In Politics 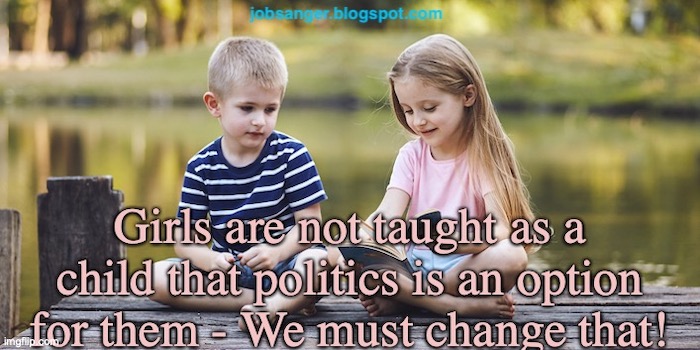 It's just a fact that most of the people in politics are men. More women are now entering politics, but they still don't make up as big a percentage as they have in the population. One reason for this is how they are socialized as a child. While parents, schools, and other social institutions feel free to discuss politics with boys when they are young, they don't do the same with girls. That's what some researchers found in an article published in the American Political Science Review found in a study. We must change this.

Here is part of what they had to say in the conclusion to their study:

As records are broken regarding women’s electoral representation and as women such as Vice President Kamala Harris and Speaker of the House Nancy Pelosi take their places at the highest levels of political power in the United States, it is important to understand that sex-linked inequalities still exist when it comes to interest in politics and political ambition. These differences emerge in childhood and grow more acute at older ages when boys and girls develop more complex and sophisticated understandings of politics. Multiple forces shape how girls envision themselves and their place in the political world. Schools, the media, families, peers, and other socializing agents inadvertently highlight the mismatch between feminine traits and feminine roles and the male-dominated domain of politics. As girls learn more about politics and internalize society’s expectations of them, they are less likely to see traditional politics as a place for them to lead. And while our data only suggest, but do not offer direct evidence of, continuity between attitudes in childhood and attitudes in adulthood, they do indicate that efforts to elevate the political interest and ambition of women must begin early.