Protecting The Right To Vote Should Not Be Filibustered 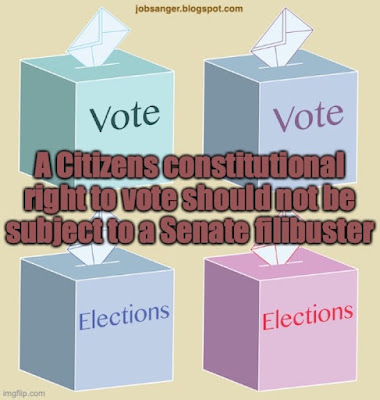 The House has passed a voting rights bill, and Democratic senators have agreed on another. But neither bill will become law because Senate Republicans will filibuster them -- and there are not 10 GOP senators that believe in protecting the right to vote by voting to stop that those filibusters.

The following is part of an article by Hayes Brown at MSNBC.com:

Senate Democrats are all finally on the same page on voting rights. The full text of the newly drafted Freedom to Vote Act dropped Tuesday, the first voting rights bill introduced this year featuring the support of the entire Democratic caucus.

That unity, unfortunately, will not inspire bipartisan comity from their Republican colleagues. Instead, the GOP will likely dig in their heels against what they know is a bill that will overturn their party’s state-level disenfranchisement efforts. A filibuster is inevitable.

What’s not written in stone is how the Democrats respond to this hurdle blocking what’s likely a once-in-a-generation chance to finally level the playing field for both parties and all of America’s voters. Because this is it — this is the ball game. There won't be time to start from scratch with a new bill. It’s not hyperbole to say the future of democracy itself depends on Congress passing voting rights legislation before the year is out. And doing so will require, at minimum, carving out an exception from the filibuster for voting rights protections.

The Freedom to Vote Act is the result of weeks of efforts from senators to craft a pared down version of the For the People Act, or S1. Sen. Joe Manchin, D-W.Va., was the lone Democratic holdout on that bill, voting with all 50 Republican senators in June to prevent the Senate from beginning debate on the bill. Since then, Manchin has worked with a group including Sens. Raphael Warnock, D-Ga., and Amy Klobuchar, D-Minn., as well as Senate Majority Leader Chuck Schumer, D-N.Y., to hammer out a compromise.

What they produced doesn’t go as far as the For the People Act on reforming campaign ethics and finance, but it contains enough provisions to safeguard future elections against Republican tampering. It includes sections that would limit the ability of the GOP to box Democratic-voting minorities into convoluted districts through gerrymandering, overturn the Supreme Court’s recent ruling on how provisional ballots can be counted and roll back newly passed laws that make voting by mail harder.

If passed, the bill will also make Election Day a federal holiday, expand voter registration and boost the power of the courts to safeguard elections. . . .

There can be no hope for the GOP to see the light on this one, as Manchin has insisted — the only way out is through changing the rules of the game. Manchin and Sen. Kyrsten Sinema, D-Ariz., have been the two most vocal holdouts to preserving the filibuster. But Norman Eisen and Norman Ornstein argued in the Washington Post Tuesday that while eliminating the filibuster is probably off the table, changes to the filibuster are likely inevitable at this point.

Creating a carveout for voting rights then provides Democrats with the chance to send the John Lewis Voting Rights Advancement Act, which passed in the House in August, to Biden’s desk as well. Together, the two bills can be the bulwark against the GOP’s attempts to revitalize Jim Crow for a modern era and dilute the poison that Republicans have allowed to seep into our elections. But this is the last chance on the table for the Senate to act. If the Democrats abrogate their duty to the American people in the name of tradition and civility, it will be decades before the damage done to our system will be able to be undone.