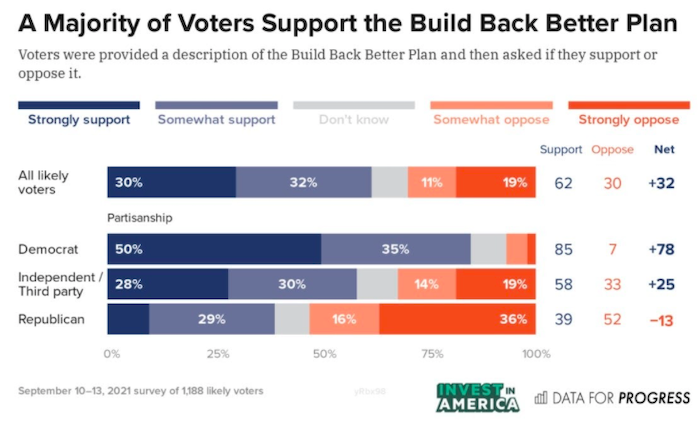 As the chart above (and many other polls) show, the public supports President Biden's "Build Back Better" plan. So, why is the plan having so much trouble passing Congress? All Republicans and a few Democrats are blocking the plan. Why?

The reason is that corporations are opposing the plan. They don't want to pay more (or any) taxes. They know the country needs the plan, and they would also benefit from it, but they don't want to help pay for it.

Here is some of what Judd Legum has to say about this at Popular Information:

The reconciliation bill, also known as the "Build Back Better" plan, has two main components. There is a wide-ranging collection of new policies, including:

There is also a set of proposals to pay for these new policies, including:

A recent poll from Data for Progress found that 62% of Americans support the reconciliation package. This includes 85% of Democrats, 58% of Independents, and 39% of Republicans.

The Data for Progress poll is not an outlier. Every recent poll of the reconciliation bill found supporters outnumbering opponents, including Pew (+24), Fox News(+22), Monmouth (+28), and Quinnipiac (+30).

While opponents of the bill are relatively small in number, they make up for it with money and power. Corporations and the wealthy have launched an aggressive campaign to defeat the legislation.

Despite the bill's significant support among independents and some Republicans, opponents can count on every Republican in Congress to vote against the legislation. But since it is a reconciliation bill and the Democrats control both chambers of Congress, it doesn't require any Republican votes to pass.

So opponents need to peel off some Democrats. Since the Senate is evenly split and Democrats control the House by a razor-thin margin, they don't have to convince many Democrats to kill the bill. Corporations and the wealthy need to convince a handful of Democratic members of Congress to vote against the preferences and interests of their constituents.

Much of this lobbying effort is taking place behind closed doors.

In the Senate, even one Democratic defection could sink the reconciliation bill. Many eyes are on Senator Kyrsten Sinema (D-AZ) who has publicly said she believes the bill is too large and privately "told Senate Democratic colleagues that she is averse to the corporate and individual tax rate increases that both the House and Senate tax-writing committees had planned to use to help pay for the measure."

On Tuesday, five corporate lobbying groups are hosting a fundraiser for Sinema in DC. For a ticket price of $1,000 to $5,800, the event provides an opportunity to schmooze with Sinema for 45 minutes. . . .

Sinema isn't the only Democratic member of Congress who has seen an influx of corporate cash after raising doubts about the reconciliation package. Campaign finance filings reveal that "nine of the Democrats threatening the bill were rewarded during the month of August with over $150,000 in donations from PACs, including many affiliated with business groups that are lobbying against it."

For example, in August, Senator Joe Manchin (D-WV) received $5,000 each from the PACs of International Paper Co. and Marathon Petroleum. Manchin has been a key Democratic voice objecting to the size and scope of the reconciliation bill." The paper company’s chair and CEO, Mark Sutton, is a member of the Business Roundtable. Suzanne Gagle, Marathon’s general counsel and senior vice president for government affairs, is a board member of the National Association of Manufacturers (NAM)," Sludge reports. Both the Business Roundtable and NAM are lobbying against the legislation. . . .

The Business Roundtable also announced a "multi-million-dollar campaign" to defeat the reconciliation bill which will include "direct CEO engagement to Capitol Hill and the Administration, as well as high-frequency radio print and digital ads in over 50 media markets across the country, generating calls and letters from constituents in target states."