There Is A Legal Remedy To The Odious Texas Abortion Law 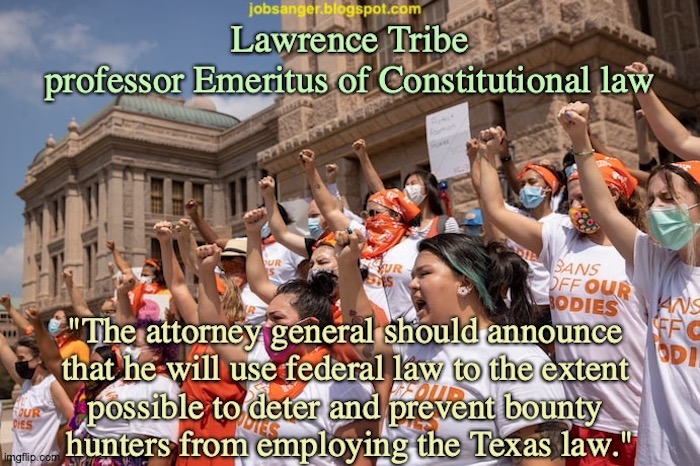 When the Supreme Court let the terrible Texas law on abortion go into effect, a lot of people (including me) freaked out. But perhaps we overreacted. Lawrence Tribe, professor emeritus of constitutional law at Harvard University, says there is a legal remedy, and he urges Attorney General Merrick Garland to use it.

Here is what Tribe has to say:

The Texas legislature and five Supreme Court justices have joined forces to eviscerate women’s abortion rights — the legislature by creating and the justices by leaving in place a system of private bounties designed to intimidate all who would help women exercise the right to choose. But the federal government has — and should use — its own powers, including criminal prosecution, to prevent the law from being enforced and to reduce its chilling effects.

Of course, the best approach would be for Congress to codify the right to abortion in federal law, although Democrats likely lack the votes to make that happen — and there is a risk that this conservative Supreme Court would find that such a statute exceeded Congress’s authority under the Commerce Clause.

But as President Biden calls for a “whole of government” response to the fact that thousands of women in Texas — and no doubt soon elsewhere — are being denied their constitutional rights, there are other solutions that already exist in federal law.

Attorney General Merrick Garland has the power, under federal civil rights laws, to go after any vigilantes who employ the Texas law to seek bounties from abortion providers or others who help women obtain abortions.

The attorney general should announce, as swiftly as possible, that he will use federal law to the extent possible to deter and prevent bounty hunters from employing the Texas law. If Texas wants to empower private vigilantes to intimidate abortion providers from serving women, why not make bounty hunters think twice before engaging in that intimidation?

For example, Section 242 of the federal criminal code makes it a crime for those who, “under color of law,” willfully deprive individuals “of any rights, privileges, or immunities secured or protected by the Constitution or laws of the United States.”

This statute — originally designed to go after the Ku Klux Klan — fits the Texas situation perfectly: The bounty seekers, entitled under the Texas law to collect penalties of at least $10,000, have been made, in effect, private attorneys general of Texas. They act “under color of state law,” and unless and until Roe v. Wade is overruled, they unmistakably intend to prevent the exercise of a constitutional right.

In addition, Section 241 of the federal criminal code makes it an even more serious crime for “two or more persons” to agree to “oppress, threaten, or intimidate” anyone “in the free exercise or enjoyment of any right or privilege secured to him by the Constitution or laws of the United States, or because of his having so exercised the same.” This crime may be committed even by individuals not found to be acting “under color of law” but as purely private vigilantes, as long as they’re acting in concert with others.

Again, the Texas scheme could hardly be more perfectly designed to match the language of that section. The whole point of the Texas law, after all, is to intimidate abortion providers and others by threatening them with penalties of at least $10,000, plus legal fees, in the form of bounties to be paid to the vigilante. Even jurists who believe the Constitution does not protect abortion rights might be given pause by this seizure of private property, with unlimited penalties not tied to any actual harm suffered by the bounty hunter.

It would be particularly fitting — in tune not just with the letter but the spirit of the law — to use the Ku Klux Klan Act in this way. After all, the statute was enacted in 1871, in the aftermath of the Civil War, precisely to prevent Klansmen from lynching and other attacks on formerly enslaved Black citizens, including to prevent them from exercising their constitutional right to vote. As the Klan rampaged in the former Confederacy, Southern states didn’t simply turn a blind eye to its vigilante justice but encouraged it.

In addition to these criminal provisions, there are civil actions available under federal law, including the ability to seek and obtain court orders to halt the illegal state scheme. The Justice Department can’t directly use the civil provisions of the Ku Klux Klan Act; only the injured party can. But the All Writs Act, which permits federal courts to “issue all writs necessary or appropriate in aid of their respective jurisdictions” could allow the department to go to court to seek an order blocking the Texas law from being enforced.

The Justice Department is understandably reluctant to announce particular investigations or prosecutions before pinning down more details than are yet available. But, at some point, the need to disarm those who cynically undermine constitutional rights while ducking all normal avenues for challenging their assault on the rule of law becomes paramount.

We have arrived at that point.