An Appeal To The GOP From Two Rational Republicans 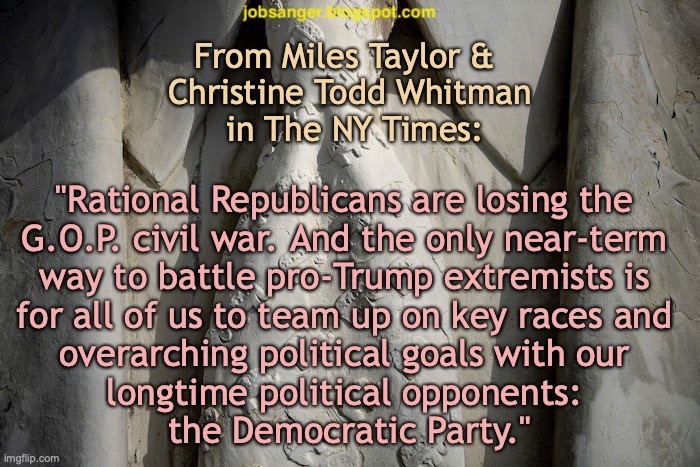 It may not seem like it, but there are a few rational Republicans left in this country. The following is a small part of an op-ed by Christine Todd Whitman (former GOP governor of New Jersey) and Miles Taylor (chief of staff in the Homeland Security Department from 2017 to 2019) in The New York Times:

After Donald Trump’s defeat, there was a measure of hope among Republicans who opposed him that control of the G.O.P. would be up for grabs, and that conservative pragmatists could take back the party. But it’s become obvious that political extremists maintain a viselike grip on the national G.O.P., the state parties and the process for fielding and championing House and Senate candidates in next year’s elections.

Rational Republicans are losing the G.O.P. civil war. And the only near-term way to battle pro-Trump extremists is for all of us to team up on key races and overarching political goals with our longtime political opponents: the Democratic Party.

Earlier this year we joined more than 150 conservatives — including former governors, senators, congressmen, cabinet secretaries, and party leaders — in calling for the Republican Party to divorce itself from Trumpism or else lose our support, perhaps by forming a new political party. Rather than return to founding ideals, G.O.P. leaders in the House and in many states have now turned belief in conspiracy theories and lies about stolen elections into a litmus test for membership and running for office.

Breaking away from the G.O.P. and starting a new center-right party may prove in time to be the last resort if Trump-backed candidates continue to win Republican primaries. We and our allies have debated the option of starting a new party for months and will continue to explore its viability in the long run. Unfortunately, history is littered with examples of failed attempts at breaking the two-party system, and in most states today the laws do not lend themselves easily to the creation and success of third parties.

So for now, the best hope for the rational remnants of the G.O.P. is for us to form an alliance with Democrats to defend American institutions, defeat far-right candidates, and elect honorable representatives next year — including a strong contingent of moderate Democrats.

It’s a strategy that has worked. Mr. Trump lost re-election in large part because Republicans nationwide defected, with 7 percent who voted for Mr. Trump in 2016 flipping to support Joe Biden, a margin big enough to have made some difference in key swing states.

Even still, we don’t take this position lightly. Many of us have spent years battling the left over government’s role in society, and we will continue to have disagreements on fundamental issues like infrastructure spending, taxes and national security. Similarly, some Democrats will be wary of any pact with the political right.

But we agree on something more foundational — democracy. We cannot tolerate the continued hijacking of a major U.S. political party by those who seek to tear down our Republic’s guardrails or who are willing to put one man’s interests ahead of the country. We cannot tolerate the leaders of the G.O.P. — in 2022 or in the presidential election in 2024 — refusing to accept the results of elections or undermining the certification of those results should they lose. . . .

A compact between the center-right and the left may seem like an unnatural fit, but in the battle for the soul of America’s political system, we cannot retreat to our ideological corners.

A great deal depends on our willingness to consider new paths of political reform. From the halls of Congress to our own communities, the fate of our Republic might well rest on forming alliances with those we least expected.