By Hinting At 2024 Trump Keeps The Money Flowing In 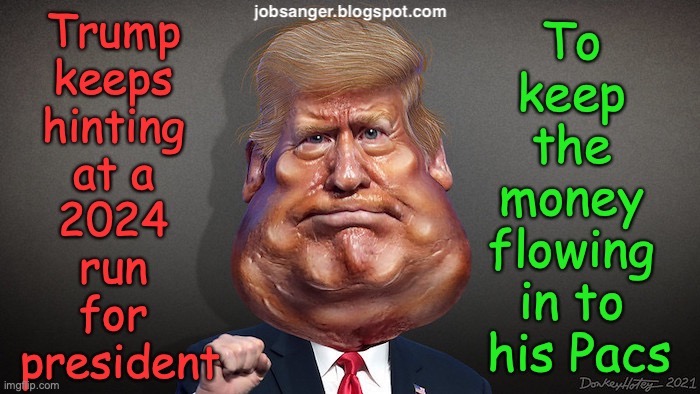 Donald Trump keeps hinting at running for president again in 2024. Democrats would love that, since Trump is one of the most detested men in the country. Is he serious about running? Maybe, but by just hinting at it, he keeps the money flowing in to his PAC's -- and since he's not a candidate, that money can be spent any way he wants (including just putting it in his bank account). That may well be the real reason he's dangling a 2024 candidacy.

Here's part of how Zeesham Aleem reports this at MSNBC.com:

Or at least that’s what he and his inner circle want you to think.

According to a new report from The Washington Post, the twice-impeached former president is holding campaign-style rallies in battleground states and has another planned for Saturday in Iowa, which holds the first-in-the-nation caucus. In recent weeks, his and his allies’ email campaigns requesting donations have hit 2020-level frequency. Trump is also constantly floating quotes implying that he’s interested in running again, and his advisers are amplifying them. “An informal poll of 13 of his current and former advisers in recent days indicated that 10 believed he would run, two said it was a public relations ploy, and another said he was not sure,” the Post reports.

It is impossible to know if Trump does actually plan to make another White House bid. While his massive yet fragile ego is helping fuel the idea of a triumphant return to the Oval Office, it’s also the reason he might decline to run again should poll numbers suggest he’d get thrashed. We’re simply too far away from 2024 to know. . . .

There are potential payoffs to cultivating that hype: It’s a way to try to keep a future lane clear, pre-empt challengers, and make sure he remains an intimidating fundraising juggernaut.

Keeping other 2024 potentials, especially those who model themselves on Trump, like Florida Gov. Ron DeSantis, more worried about their prospects if they try to enter the race is one big potential benefit. Trump’s constant 2024 bluster could make these rivals more reluctant to hint at their own runs. It could also freeze them out of some high-profile donor circles. And since a very poor presidential run can sometimes hurt a politician's national stature, it could make a potential candidate rethink whether they should run at all.

Meanwhile Trump’s current fundraising efforts — which are going to his and his allies’ political committees and have taken in unprecedented sums for a former president — cannot be used to finance an official presidential campaign. But the money can be used to pay for travel, events, advisers and ad campaigns. It can also be used to support pro-Trump candidates or other political causes. So when Trump uses his 2024 flirtations to boost his war chest, there’s a self-fulfilling element to it. He can use that money to fund operations that build buzz — and a potential mandate — for an official run. Moreover, the more Trump locks donors into his fundraising apparatus, the more he may intimidate challengers or dampen their own ability to raise money, since there are a finite number of donors to draw money from. . . .

Trump can also use the specter of his potential presidency to continue trying to regulate the direction of the Republican Party, which has been divided over questions of whether it should remain a Trumpian populist enterprise or revert to the more traditional style of conservatism that predated his presidency. . . .

Lastly, Trump knows that he can parlay the enhanced attention he gets from constantly dangling a presidential run into non-presidential ambitions, like a new media outlet or any other new business. An entertainer and businessman at heart, Trump instinctively thinks of attention as something that can be monetized, and it's impossible to extricate his hunger for profit from his hunger for political power.