Can Our Nation Survive With This Many Dumb People? 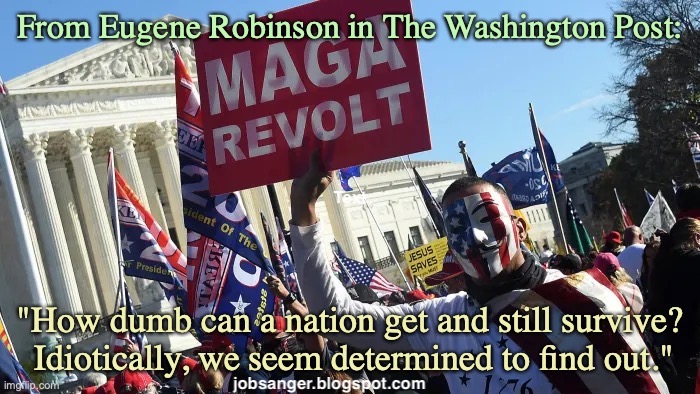 There are many people in this country, literally millions, who no longer believe in truth or facts. They pose a danger to our nation and its democratic system. Can our nation survive them? It's a valid question.

Here's what Eugene Robinson had to say about this in The Washington Post:

T.S. Eliot wrote that the world ends "not with a bang but a whimper,” but I fear our great nation is careening toward a third manner of demise: descent into lip-blubbering, self-destructive idiocy.

How did we become, in such alarming measure, so dumb? Why is the news dominated by ridiculous controversies that should not be controversial at all? When did so many of our fellow citizens become full-blown nihilists who deny even the concept of objective reality? And how must this look to the rest of the world?

Read the headlines and try not to weep:

Our elected representatives in the U.S. Senate, which laughably calls itself “the world’s greatest deliberative body,” agreed Thursday not to wreck our economy and trigger a global recession — at least for a few weeks. Republicans had refused to raise the federal debt ceiling, or even to let Democrats do so quickly by simple majority vote. They relented only after needlessly unsettling an international financial system based on the U.S. dollar.

The frequent games of chicken that Congress plays over the debt ceiling are — to use a term of art I recall from Economics 101 — droolingly stupid. In the end, yes, we always agree to pay our obligations. But the credit rating of the planet’s greatest economic superpower has already been lowered because of this every-few-years ritual, and each time we stage the absurd melodrama, we risk a miscalculation that sends us over the fiscal cliff.

Today’s trench-warfare political tribalism makes that peril greater than ever. An intelligent and reasonable Congress would eliminate the debt ceiling once and for all. Our Congress is neither.

In other news, Sen. Lindsey O. Graham (R-S.C.) was speaking to a crowd of Republicans at a country club in his home state Saturday when he tried, gently, to boost South Carolina’s relatively low rate of vaccination against the coronavirus. He began, “If you haven’t had the vaccine, you ought to think about getting it because if you’re my age — ”

“No!” yelled many in the crowd.

Graham retreated — “I didn’t tell you to get it; you ought to think about it” — and then defended his own decision to get vaccinated. But still the crowd shouted him down. Seriously, people?

Covid-19 is a highly infectious disease that has killed more than 700,000Americans over the past 20 months. The Pfizer, Moderna and Johnson & Johnson vaccines all but guarantee that recipients will not die from covid. I have, or had, an acquaintance who refused to get vaccinated, despite pleas from his adult children to protect himself. He got covid-19, and it killed him. Most of the deaths the nation has suffered during the current delta-variant wave of the disease — deaths of the unvaccinated — have been similarly needless and senseless.

Covid-19 is a bipartisan killer. In the tribal-political sense, the safe and effective vaccines are a bipartisan miracle, developed under the Republican Trump administration and largely distributed under the Democratic Biden administration. People in most of the rest of the world realize, however, that vaccination is not political at all; it is a matter of life and death, and also a matter of how soon — if ever — we get to resume our normal lives.

Why would people not protect their own health and save their own lives? How is this anything but just plain stupid?

We are having other fights that are, unlike vaccination, partisan and political — but equally divorced from demonstrable fact.

Conservatives in state legislatures across the country are pushing legislation to halt the teaching of “critical race theory” in public schools. I put the term in quotes because genuine critical race theory, a dry and esoteric set of ideas debated in obscure academic journals, is not actually being taught in those schools at all. What’s being taught instead — and squelched — is American history, which happens to include slavery, Jim Crow repression and structural racism.

I get it. The GOP has become the party of White racial grievance, and this battle against an imaginary enemy stirs the base. But the whole charade involves Republican officials — many of them educated at the nation’s top schools — betting that their constituents are too dumb to know they’re being lied to. So far, the bet is paying off.

And then, of course, there’s the whole “stolen election” farce, which led to the tragedy of Jan. 6. Every recount, every court case, every verifiable fact proves that Joe Biden fairly defeated Donald Trump. Yet a sizeable portion of the American electorate either can’t do basic arithmetic or doesn’t believe that one plus one always equals two.

How dumb can a nation get and still survive? Idiotically, we seem determined to find out.