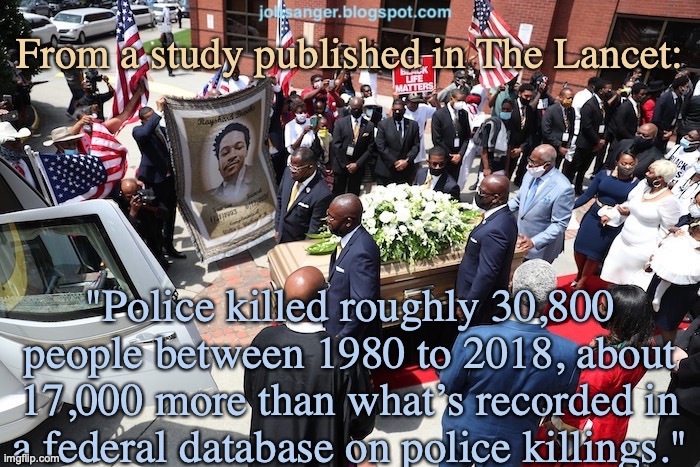 We already knew that the United States had a serious problem with police killing people (many of them unarmed) -- far more than any other developed nation. But now, thanks to a study published in The Lancet, we learn that deaths by police have been vastly undercounted (by at least 17,000 between 1980 and 2018).

Here is how Ja'han Jones reported this at MSNBC.com:

Police killed roughly 30,800 people between 1980 to 2018, about 17,000 more than what’s recorded in a federal database on police killings, according to a new study published Thursday.

In their report, researchers at the University of Washington pointed to clerical errors as well as "substantial" conflicts of interest between medical examiners and police as reasons for the major discrepancy.

Medical examiners and coroners may face pressure to underreport police killings because many of them “work for or are embedded within police departments,” according to the study, which was published in the medical journal The Lancet.

The researchers compared their data to the National Vital Statistics System, a federal database managed by the Centers for Disease Control and Prevention that keeps track of births and deaths.

Activists — and even several coroners — have called out that corrupt relationship for years. For example, back in 2017, two medical examiners from San Joaquin County in California quit after alleging the county sheriff pressured them to alter autopsy results for deaths that occurred in police custody.

Some medical examiners have also been accused of providing cover for police during criminal trials. For example, attorneys for Derek Chauvin, the former Minneapolis police officer who murdered George Floyd in May 2020, enlisted Maryland’s former chief medical examiner to testify as an expert witness during Chauvin's trial.

Despite overwhelming evidence showing Chauvin murdered Floyd, the former medical examiner, Dr. David Fowler, testified that the cause of death should have been left “undetermined.” He also said Floyd died of a sudden heart rhythm disturbance as a result of heart disease and carbon monoxide poisoning from vehicle exhaust.

Notably, a New York Times report in May brought to light racist trends in medical examiners’ diagnoses. The Times found doctors have used the sickle cell trait — disproportionately found in Black people — to help explain away instances of anti-Black violence by police.

To be clear, Thursday’s report on police killings said the incorrect numbers could be attributable to several factors, not just conflicts of interest. For example, “only some cities have forensic pathologists to act as the coroner,” researchers wrote. “And in small, rural counties, the coroner can be a physician with no forensic training, the sheriff or a mortician.”

Inaccurate data can also occur as a result of a medical examiner “failing to indicate police involvement in the text fields of the death certificate’s cause of death section,” according to the study.

In other words, an unknown number of these unreported police killings could have been clerical errors.