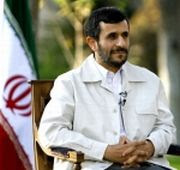 Let me say right off the top here that I am not a supporter of Iranian President Mahmoud Ahmadinejad. I consider him to be a fool and a troublemaker, and the world would be a better place if he were not the president of Iran. But this does not excuse the poor behavior of many Americans to his visit, including Columbia University president Lee Bollinger.
Ahmadinejad is in New York for a visit to the United Nations. Many Americans have shown their own intolerance by saying he should not have been allowed into the country. That is just silly. As long as the United Nations is in this country, then we must allow the leader of any member nation to come and speak, regardless of whether we agree with his politics or not. Doing otherwise would only highlight our own unfairness.
When it was learned that Ahmadinejad was coming to this country, he was invited to speak at Columbia University. Contrary to what others think, I believe this was a good thing. It showcased one of our most treasured freedoms -- freedom of speech. Freedom of speech means even those we disagree with are allowed to speak. If the speaker is a fool, it will reveal itself when he opens his mouth to speak.
But I believe Columbia's president was wrong in his actions yesterday. After inviting Ahmadinejad to speak, he virtually ambushed him with slurs and insults. It was unbecoming of an educator in a great university to treat a guest in such a way. Bollinger said his guest was "ridiculous", "astonishingly uneducated" and a "cruel and petty dictator" (even though he was elected by a majority of his countrymen).
Maybe I'm old-fashioned, but I was taught that you do not treat an invited guest in such a shoddy manner. If you cannot be decent to your guest, THEN DON'T INVITE HIM! But once you do extend an invitation, it is your responsibility to treat your invited guest with common decency. You don't have to agree with him, but you should not insult him.
Bollinger's actions are not heroic. It makes him look as though he was not properly raised and taught the value of common decency.
Posted by Ted McLaughlin at 12:01 AM