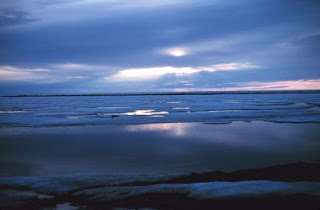 Over 150 countries just met at the United Nations to discuss global climate change. Secretary General Ban Ki-Moon said, "If we do not act now, the impact of climate change will be devastating." It seems that world leaders are in agreement that humans are causing global climate change, and action must be taken soon to avoid disastrous consequences. But what do ordinary people think?
The BBC has just conducted a poll that answers that question. They surveyed over 22,000 people in 21 countries, including the United States. The results show that a huge majority (79%) believe that global climate change is caused by human activity. In fact, around 90% of the people believe that action should be taken to curb production of greenhouse gases, with nearly 2/3 believing that action must be taken soon.
It seems that only a tiny minority (around 10%) agree with George Bush that global climate change has not been proven. Personally, I think George believes it too -- he just can't bring himself to ask his corporate buddies to stop polluting. After all, too much money is being made by all this polluting, and it might cut into those windfall profits if corporations had to clean up their act.
But George is part of an ever dwindling minority. Over 59% in the United States believe action must be taken very soon, and another 33% believe some action must be taken in the next few years.
I don't think I've ever seen a president so out of touch with ordinary citizens. They disagree with him on the war, on how to fight terrorism, on the need for reform in medical care, and as this poll shows, they also disagree with him on global climate change. But like an ostrich, George keeps his head buried in the sand and refuses to see the real world.
It is becoming more obvious every day that we must put Democrats back in power in the next election, including a Democrat in the White House. The Republicans have had their chance, and refuse to take action to solve our problems.
Posted by Ted McLaughlin at 12:03 AM