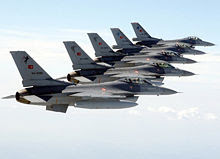 After the tragedy in September 2001, most of the world was behind us. It took Bush less than two years to squander all that good will. By the end of 2003, most nations were looking at us as agressors who had unjustifiably invaded another country. This was true even of countries that had long been our friends.
Even when governments such as England supported us, the vast majority of their population didn't. In Iraq, Bush wound up putting our soldiers between two warring faction, both of whom hated us -- the Shiites and the Sunnis.
But there was one group that liked us. The Kurds of northern Iraq had been oppressed by Saddam for many years. They were among the few groups in the world that appreciated our invasion of Iraq. The invasion not only removed their oppressor, but allowed them to set up self-rule in northern Iraq. They were the only Iraqi group that our soldiers could really count as friends.
But evidently, having friends in Iraq is not something Bush cares much about. It looks like he has now turned even the Kurds against us. Yesterday, the president of the Kurdish regional government in Iraq refused to meet with Condi Rice.
The Kurds in Iraq are angry with the Bush administration for siding with the Turks against them. They say Bush has allowed the Turks to indiscriminately bomb innocent Kurdish civilians. They know the Turks could not invade Iraqi airspace to do this unless they had Bush's blessing.
The Kurds should be used to being sold out by a Bush. The first President Bush encouraged them to revolt against Saddam, and then would not act to help them when they did. He allowed Saddam to brutally quash the revolt.
When the second President Bush freed them from Saddam, they thought they finally had a friend. They were wrong. All it took was a little noise from the Turks, and Bush II quickly sold them out.
The Kurdish president is absolutely right. No plane can fly in Iraqi airspace (especially performing military missions) without the blessing of the Bush administration. Any planes not authorized by Bush would be quickly blasted out of the sky.
The longer we are in Iraq, the clearer it becomes. Bush is there for the oil. Nothing and no one else matters.
Posted by Ted McLaughlin at 12:01 AM