Castro Will Run For Re-Election 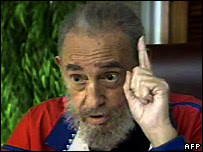 In July of 2006, Fidel Castro turned the running of the Cuban government over to his brother Raul. He did this because he was very ill and needed intestinal surgery.
At that time, there were celebrations among the conservative element in this country. They were sure that Castro was dying and there would very soon be a revolution in Cuba that would install a pro-United States government. They were wrong.
The operation was successful, and Castro has had a slow but sure recovery from the illness. Raul says Fidel continues to get stronger and gain weight, and exercises for two hours each morning and evening.
As recently as a couple of weeks ago, there were those who said Castro would not stand for re-election because of his health. Raul says that is not true. He says Fidel will be running for parliament in Santiago. That would be the first step in his returning as Cuba's leader. If he is re-elected to parliament, the chances are very good that he would again be chosen President.
It looks like his detractors will have to wait a while longer for Cuba to replace Fidel Castro with another leader. Even then, there is no reason to believe that Cuba would replace him with a leader that would change Cuba's current policies.
Posted by Ted McLaughlin at 12:01 AM