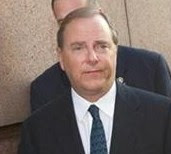 Jeffrey Skilling was one of the leading players in the Enron scandal. Along with other company executives, he helped to "cook the books" and inflate the perceived value of Enron. This allowed him and others to bank millions of dollars while at the same time bilking employees and investors of money. Many lost their life-savings in the debacle.
In October of 2006, Skilling was found guilty and sentenced to 24 years in prison. He started serving that sentence in December of 2006 after a judge denied his request to stay free while appealing the verdict.
Evidently, Skilling doesn't like it in the Minnesota federal prison where he is serving his sentence (good!). Through his attorney, he is again asking to be freed on an appeal bond while the 5th Circuit Court of Appeals considers his appeal of the trial verdict. In the request, his attorney wrote, "Mr. Skilling is not a flight risk or danger to the community."
I hope the appeals court doesn't grant this ridiculous request. Skilling is right where he should be -- serving a long prison sentence. He might not be a flight risk, but he caused serious damage to the lives and fortunes of millions of people.
There is no good reason to release this criminal from prison. He has earned every minute he spends in a federal prison.
Posted by Ted McLaughlin at 12:04 AM