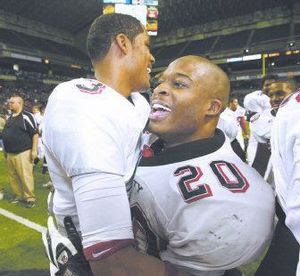 Last Saturday, the Euless Trinity Trojans played in the class 5-A championship game for the third time. On all three occasions, the opponent has been the Converse Judson Rockets. The Rockets (7-time state champions) won the first meeting, but the Trojans have won the last two.
On Saturday, Trinity held on to win a very close game 13-10. To win, they depended on the metroplex's best defense (allowing an average of only one touchdown per game). The defense gave up a touchdown and a field goal in the first half, but didn't allow the Rockets to get anywhere near the goal line in the second half. They were magnificent.
On offense, Trinity relied heavily on their senior running back, Samir Baker (#20 in picture above). Baker is only 5' 6" and 177 lbs., but he plays like he's much larger. In Saturday's game, he carried the ball 40 times for 229 yards. In the final quarter, when Trinity needed to keep the ball and keep making first downs to run out the clock, they just kept giving the ball to Baker -- and he delivered big-time. Of course, it didn't hurt that he was running behind one of the biggest and best offensive lines in the state.
During the regular season, Baker shared running back duties with Dontrayevous Robinson. Baker ran for 1102 yards and Robinson ran for 876 yards. The two-back tandem worked well for the Trojans.
But Robinson was injured and played very little in the play-offs. It was up to Baker to carry the load during the play-offs, and he did it very well. In the six games of the play-offs, he carried the ball 181 times for 1095 yards (averaging over 182 yards per game). He may be small in stature, but he played like a giant.
I imagine many of the major colleges will probably consider Baker too small. If so, they will be making a big mistake. Baker has a big talent, a determined work-ethic and the kind of huge "heart" that coaches pray for in their players. He's going to make some college coach a very happy man.
Congratulations Trinity Trojans --Class 5A-Div.I State Champions for 2007!
Posted by Ted McLaughlin at 12:02 AM