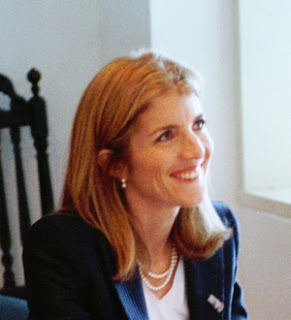 There are those who believe the candidacy of Barack Obama is reminiscent of the candidacy of President John Kennedy. They say he is a younger man who offers a new vision of hope and unity for the United States, much like Kennedy did.
Interestingly, it looks like one of those people is Caroline Kennedy -- daughter of President John Kennedy. She has written an op-ed piece for the New York Times, in which she parallels Obama's candidacy to her father's. She goes on to endorse Obama for the presidency. It's a great editorial, and I recommend you go to the NY Times and read the whole thing. Here is some of what she says:

OVER the years, I’ve been deeply moved by the people who’ve told me they wished they could feel inspired and hopeful about America the way people did when my father was president. This sense is even more profound today. That is why I am supporting a presidential candidate in the Democratic primaries, Barack Obama.
My reasons are patriotic, political and personal, and the three are intertwined. All my life, people have told me that my father changed their lives, that they got involved in public service or politics because he asked them to. And the generation he inspired has passed that spirit on to its children. I meet young people who were born long after John F. Kennedy was president, yet who ask me how to live out his ideals.
Sometimes it takes a while to recognize that someone has a special ability to get us to believe in ourselves, to tie that belief to our highest ideals and imagine that together we can do great things. In those rare moments, when such a person comes along, we need to put aside our plans and reach for what we know is possible.
We have that kind of opportunity with Senator Obama. It isn’t that the other candidates are not experienced or knowledgeable. But this year, that may not be enough. We need a change in the leadership of this country — just as we did in 1960.
Posted by Ted McLaughlin at 12:06 AM