Where It Will Fall Nobody Knows 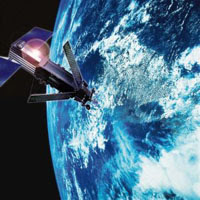 On the old TV show Northern Exposure, there was a female character who's husbands kept dying. One of them was killed by a satellite falling on him. At the time, it just seemed like a funny way to kill off a TV-show character -- now it looks like it could really happen to someone.
There's a 10-ton piece of space junk (the size of a small bus) that will fall out of the sky about a month from now -- around the end of February or the first part of March. It's one of our own spy satellites that lost power and is now in a degrading orbit.
The bad part is that no one knows where it's going to fall. The scientists can predict the approximate time it will fall, but they don't have a clue as to where.
Fortunately, most of the earth is covered with water, and past "falling junk" has landed harmlessly. But there's always the chance that this one will conk one or more of us on the head.
But even if it doesn't hit anyone, it could still be dangerous. That's because this satellite contains hydrazine -- a poisonous rocket fuel that could harm anyone it comes in contact with.
It's not too comforting to know our government is sending large poisonous metal objects into space, that will one day come hurtling back down toward us. Maybe they should have thought of that before they did it.
I feel like we're all part of a giant lottery -- only this is one you don't want to win.
Posted by Ted McLaughlin at 12:01 AM