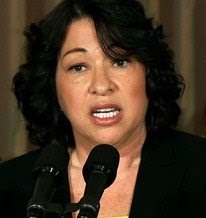 President Obama has made his first nomination for the Supreme Court, and it looks like a good one. He has chosen Appeals Court judge Sonia Sotomayor. She was chosen for the federal bench by Republican George H. W. Bush (Bush I) and for the appeals court by Democrat Bill Clinton.

That shows the broad range of support she has had in her career. About the only people who don't like her are the right-wing Republicans. But then they wouldn't have liked anyone nominated by President Obama. They had already made up their minds to vote against his nominee before anyone even knew who the nominee was.

Screw them! Let them whine and bellyache all they want. They don't have the votes to stop the nomination, or even to slow it down. Obama wants her approved by the August recess, and I think that will happen -- whatever the party of No says or wants.

She will be the first Hispanic on the court, and that's not only a good thing but long overdue. Hispanics make up a significant and fast growing portion of the United States population. It's about time they had some representation on the Supreme Court.

Ms. Sotomayor also has more judicial experience (at the time of nomination) than any judge currently sitting on the court, or in fact,any justice in the last 100 years.

But will she be a great justice on the court? I hope so, but only time will tell. We won't know until she dons the robes of that lifetime position, and is guided by only her conscience and the Constitution. There have been some surprises in the past.

Take Earl Warren for instance. He was nominated because he was viewed as a "safe" conservative who wouldn't shake things up on the court. Then he became the driving force behind the Brown v. Board of Education decision, and wound up becoming one of the greatest of the liberal justices.

I believe she'll be a great justice, but we'll see after she takes her place on the bench.
Posted by Ted McLaughlin at 12:04 AM