Secret Service Falls Down On The Job 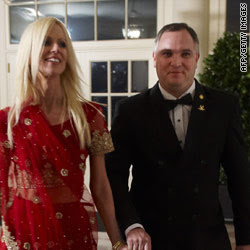 The Secret Service has to be embarrassed by this. President Obama held a state dinner Tuesday night at the White House to honor the visiting Prime Minister from India, Manmohan Singh. About 300 Cabinet Ministers, diplomats and Hollywood celebrities were invited, but a couple of people showed up who were not on the guest list.
Tareq and Michaele Salahi (pictured) somehow made it through several security checks and into the dinner. They even got their picture taken with Vice-President Biden and Rahm Emanuel, which Michaele posted on her Facebook page. This is not the first time this couple has tried this sort of thing. They also talked their way into the President's parade box on Inauguration Day (after the President had left).
The couple seem proud of their accomplishment, but that may change. If they lied to the Secret Service to get in (and that almost has to be), then they have committed a felony criminal offense.
Personally, I'm wondering what is wrong with the Secret Service. With all the death threats President Obama has received, I would have thought they would be on their highest alert -- especially at a state dinner where a foreign leader was present. But they obviously did not bring their A-game last Tuesday.
Edwin M. Donovan, a Secret Service spokesman, said a checkpoint "did not follow proper procedures" to make sure the couple was on the guest list before allowing them to enter. That is unacceptable. Did they think assassins or terrorists could not rent a tuxedo and ball gown and make themselves look like a well-to-do couple?
They were lucky this time that it was just a couple of jerks trying to make themselves look important. But that doesn't mean that next time it couldn't be someone dangerous. The Secret Service had better figure out what went wrong, and make sure it never happens again.
Posted by Ted McLaughlin at 12:02 AM