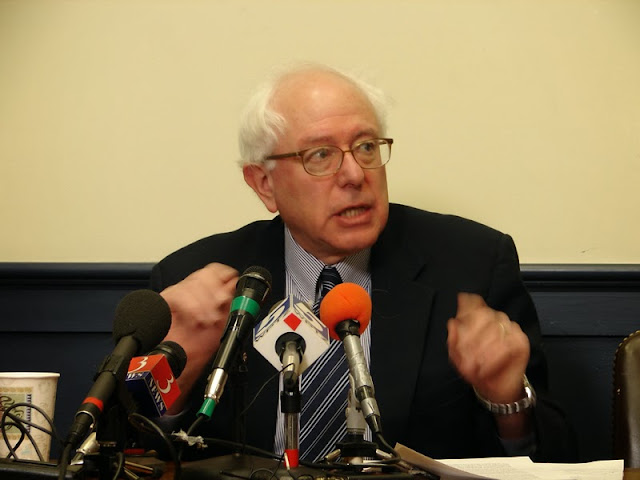 As we prepare to enter a new year, a lot of politicians and pundits are sending out greetings and detailing their wishes for the new year. My favorite politician, Senator Bernie Sanders (I-Vermont), has done the same. Here is his message to his supporters, which I gladly share with my readers:


I want to take this opportunity to wish you and yours a very happy new year.  I also want to express my gratitude to you for the political support that you have given to me, and for all of your efforts in trying to move our country and the world in the direction of peace, justice and environmental sanity.As we survey our country at the end of 2013 I don't have to tell you that the problems facing us are monumental, that the Congress is dysfunctional and that more and more people (especially the young) are, understandably, giving up on the political process.  The people are hurting.  They look to Washington for help.  Nothing is happening.
Clearly, if we are going to save the middle class and protect our planet, we need to change the political dynamics of the nation. We can no longer allow the billionaires and their think tanks or the corporate media to set the agenda. We need to educate, organize and mobilize the working families of our country to stand up for their rights. We need to make government work for all the people, not just the 1 percent.
When Congress reconvenes for the 2014 session, here are a few of the issues that I will be focusing on.   WEALTH AND INCOME INEQUALITY: A nation will not survive morally or economically when so few have so much while so many have so little. It is simply not acceptable that the top 1 percent owns 38 percent of the financial wealth of the nation, while the bottom 60 percent owns all of 2.3 percent. We need to establish a progressive tax system which asks the wealthy to start paying their fair share of taxes, and which ends the outrageous loopholes that enable one out of four corporations to pay nothing in federal income taxes.JOBS: We need to make significant investments in our crumbling infrastructure, in energy efficiency and sustainable energy, in early childhood education and in affordable housing. When we do that, we not only improve the quality of life in our country and combat global warming, we also create millions of decent paying new jobs.WAGES: We need to raise the minimum wage to a living wage. We should pass the legislation which will soon be on the Senate floor which increases the federal minimum wage from $7.25 an hour to $10.10 an hour, but we must raise that minimum wage even higher in the coming years. We also need to expand our efforts at worker-ownership. Employees will not be sending their jobs to China or Vietnam when they own the places in which they work.RETIREMENT SECURITY: At a time when only one in five workers in the private sector has a defined benefit pension plan; half of Americans have less than $10,000 in savings; and two-thirds of seniors rely on Social Security for more than half of their income we must expand Social Security and make sure that every American can retire with dignity. WALL STREET: During the financial crisis, huge Wall Street banks received more than $700 billion in financial aid from the Treasury Department and more than $16 trillion from the Federal Reserve because they were "too big to fail." Yet today, the largest banks in this country are much bigger than they were before taxpayers bailed them out. It is time to break up these behemoths before they cause another global economic collapse.CAMPAIGN FINANCE REFORM: We are not living in a real democracy when large corporations and a handful of billionaire families can spend unlimited sums of money to elect or defeat candidates. We must expand our efforts to overturn the disastrous Citizens United Supreme Court decision and move this country to public funding of elections.SOCIAL JUSTICE: While we have made progress in recent years in expanding the rights of minorities, women and gays, these advances are under constant attack from the right wing. If the United States is to become the non-discriminatory society we want it to be, we must fight to protect the rights of all Americans.CIVIL LIBERTIES: Frankly, the National Security Agency (NSA) and some of the other intelligence agencies are out of control. We cannot talk about America as a "free country" when the government is collecting information on virtually every phone call we make, when they are intercepting our emails and monitoring the websites we visit. Clearly, we need to protect this country from terrorism, but we must do it in a way that does not undermine our constitutional rights.WAR AND PEACE: With a large deficit and an enormous amount of unmet needs, it is absurd that the United States continues to spend almost as much on defense as the rest of the world combined. The U.S. must be a leader in the world in nuclear disarmament and efforts toward peace, not in the sale of weapons of destruction.Let me conclude by once again wishing you a happy and healthy new year -- and by asking you to share this email with friends, family and co-workers.  They can sign-up for our occasional emails by clicking here.This is a tough and historical moment in American history.  Despair is not an option.  Let us stand together as brothers and sisters and fight for the America our people deserve.  Thank you for your continued support. Sincerely,

Senator Bernie Sanders
Posted by Ted McLaughlin at 12:04 AM