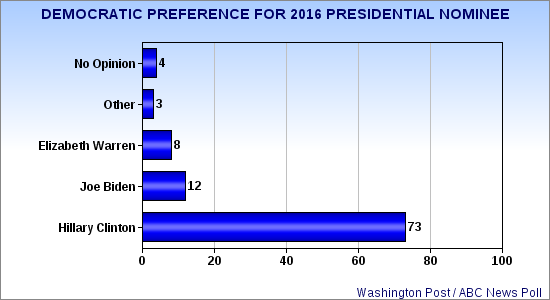 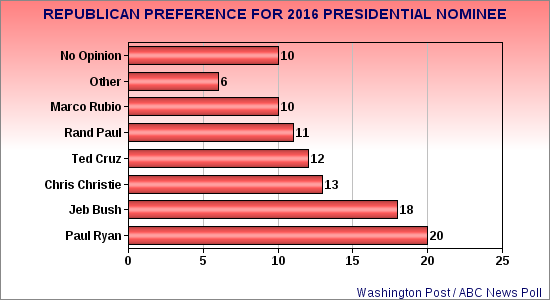 This is the latest survey to check on each party's preference for their presidential nominee in 2016. It is the Washington Post / ABC News Poll (taken between January 20th and 23rd of a random national sample of 1,003 adults, with an overall margin of error of 3.5 points).

Not a lot has changed with Democrats. If anything, Hillary Clinton has solidified her large lead. She currently has the support of 73% of Democrats -- a whopping 61 point lead over Joe Biden, who is in second place. Mr. Biden said a couple of days ago that his decision on whether to run or not would have nothing to do with whether Clinton decides to run. I suspect that was just a face-saving statement. If Clinton declares her candidacy, the nomination is hers -- and any opponent, including Joe Biden, would just be wasting their time and money to oppose her.

Things are far different for the Republicans. There is no real favorite, and five different candidates show supper between 10% and 20% (and even the high of 20% is far too little to label anyone as a favorite). The most interesting thing is the fall of Chris Christie. Many were starting to consider him the favorite to get the GOP nomination, but since his political troubles started in New Jersey (problems that are still gathering steam as new charges surface) he has lost support. He now just sits in third place -- several points behind Bush and Ryan, and within the margin of error to Cruz, Paul, and Rubio.

Normally, when there is no sitting president running for re-election, both parties have fairly exciting races to pick a nominee. 2016 will be different, since Clinton seems to have the same kind of advantage a sitting president would have. The only real race is among the Republicans -- and right now that is a race anyone could win.
Posted by Ted McLaughlin at 12:06 AM