GOP Presidential Preference From July To The Present 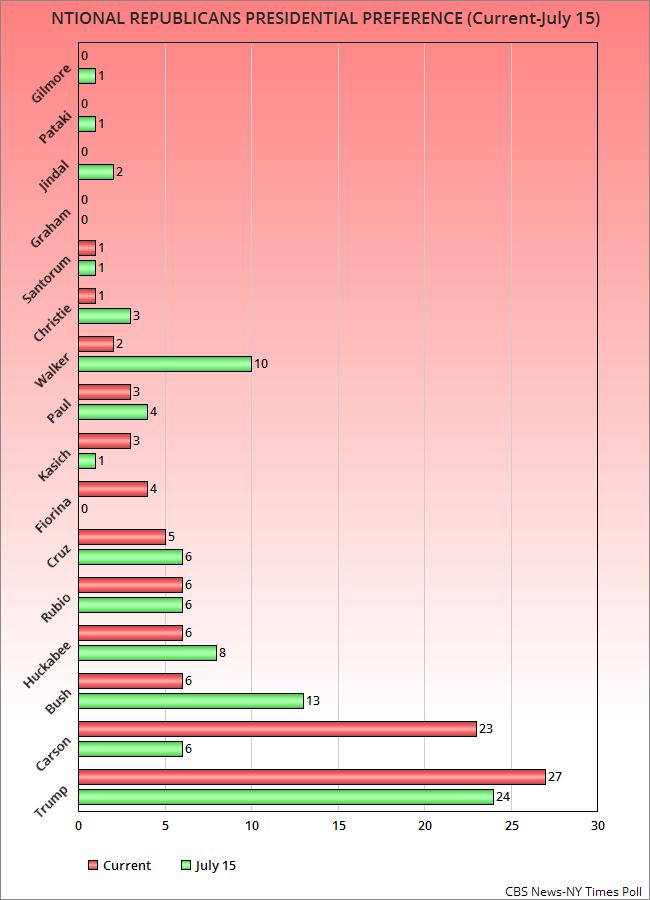 This chart was made from a new CBS News / New York Times Poll -- done between September 9th and 13th of a national sample of 376 Republican primary voters, and has a margin of error of 6 points.

The poll verifies what several others have shown in recent days -- that two candidates are far ahead in the race. Donald Trump has 27% support and Ben Carson has 23% support. No other candidate registers more than 6% support.

But the interesting part of the survey, at least for me, is when they compare current results to the results this same poll got on July 15th (two months ago). Trump has about the same result as in July (with his slight gain being within the survey's margin of error. The candidate with the biggest jump since July is Ben Carson -- who has gone from 6% to 23%. Carly Fiorina (going from 0% to 4%) and John Kasich (going from 1% to 3%) also showed a small gain (although statistically insignificant).

All of the other candidates either lost support or stayed the same. The biggest losers were Jeb Bush (who dropped 7 points) and Scott Walker (who dropped 8 points). Bush now has 6% support and Walker comes in at an embarrassing 2% support.
Posted by Ted McLaughlin at 12:04 AM